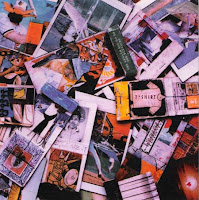 Naming your band after perhaps the single most ubiquitous variety of clothing in the Western world doesn't always lend itself to say, pertinant Google searches.  So while I can't extol on T-Shirts' origins (the Priapus record label however was rooted in Lawrence, KS) or career outside of this three-cut single, I will say that this co-ed outfit offers slightly dissonant indie rock, occupying the same tuneful airspace as small-of-fame heroes of their era Superchunk, Small Factory, and Wolfie. A simple, but enticing formula if you ask me, though maybe not as immediately endearing as their aforementioned contemporaries.  If anyone has the scoop on T-Shirt, you know the drill.

A1. Decca
A2. Museum
B. In the Red Light District of Your Heart

Seems like they had three releases, this being the first: http://www.silvergirl.com/TShirt.html