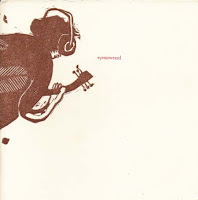 In between Guided By Voices alum Tobin Sprout's genius 1999 solo album Let's Welcome the Circus People, and 2003's Lost Planets & Phantom Voices, the man in question assembled and helmed a new group, eyesinweasel, featuring members of his previous band, Fig 4, namely bassist Dan Toohey and skin-pounder John Peterson.  The result was a group that bore a penchant for robust "mid-fi" rock and roll that paralleled the song-per-song consistency and studio savvy of the 21st century incarnation of Pollard's ever-shifting GBV lineup. Eyesinweasel made only one proper studio LP, 2000's Wrinkled Thoughts, though a live record was soon to follow.  There were also a pair of eyesinweasel singles, including this very limited 500 copy installment.  It features two tracks taped during eyesinweasel's 2000 tour rehearsals, including a muscular reworking of Tobin's fleeting Alien Lanes composition "Strawdogs" (spelled here as "Straw Dogs"), as well as "Gas Daddy Gas" which originally appeared on our man's debut solo outing, Carnival Boy. Though this was touted as a "tour single" it wasn't released until 2001, and I'm not certain if there even was an eyesinweasel tour that year.  Confused?  Thought so.

In addition to his participation of the upcoming "Classic GBV" reunion tour, Toby has also given birth to a new solo album, The Bluebirds Of Happiness Tried To Land On My Shoulder, available from his website linked above.

oooh, nice! you happen to have his Let Go of My Beautiful Balloon 7"? I loved that way back when, would love to find it digitally.

Thanks for this. I had given up on ever hearing it.

I was at that Middle East (Cambridge, MA for outsiders) gig on a FREEZING night that ended up on the CD they released.

In overhype fashion I called it "Revolver-era McCartney backed by The Who" but that wasn't far off. The CD doesn't capture the intensity and echo of the space enough, but I still claim I can hear my own yelp as I recognize "All Used Up."

If there is any Tobin that you are looking for, let me know, and I might have it. (But I strongly suspect anything I have, you already have AND MORE.)

Great blog (which I first wrote as "Greta blog" which actually is a better comment).

Thanks for reminiscing on that Middle East show Ace. Live albums/bootlegs rarely capture the magic of the actual concert itself (believe me, I've learned the hard way). As for the "Let go..." 7" I'm pretty sure I can get that up at some point.