The MP3 blogosphere has been pretty good to me.  Without it's advent, not only would I be unable to share some of the sweetest (and scarcest) songs in my collection, I might not be able to partake in the bounty made available gratis by thousands of hobbyists like myself.  In fact, without such revelatory pit stops on the information highway as the ever essential Power Pop Criminals, I might not have caught wind of a long disbanded quartet of Birmingham, Alabama heshers (i.e. long hairs) going by the name of Carnival Season.  So impressed was I by the album shared on that blog (which I'll get to in a moment), I was inspired to track down some of their other records.  In short, some pretty serious C/S fandom had taken hold, and in a more perfect world, these guys who have been plucked from obscurity for a band bio-pic instead of Anvil. 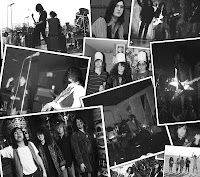 Initially spelled Karnival Season during the most nascent phase of their career, the Tim Boykin-led four-piece looked like metal heads, and certainly had the chops and adeptness to rock like said hair farmers at any given moment, but instead the boys opted to trailblaze an unbeaten path in their native deep south, taking considerable cues from Twin/Tone-era Replacements and, whether they were conscious of it or not, The Nils.  Their earliest set of demos were produced by Tim Lee of Windbreakers renown, but the meat and potatoes of Carnival Season's brief catalog (collected in it's entirety on this handy disk), was their 1987 album Waiting For No One, produced by none other than power-pop meister Tommy Keene - a huge blessing in itself, not to mention being coupled with the group's inherent talent.  Unfortunately the defiantly titled Waiting... stiffed, and a national tour in 1988 didn't do squat to bolster their profile (though they had coveted opening slots with the Mats and Meat Puppets during their tenure).  Carnival Season fizzled out not long after their lackluster road trip, but one thing that couldn't be squelched was the flabbergasting melodic, riff-savvy, hard jangled post-punk rock that made it's way onto some very precious tape reels back in the late '80s.

As mentioned above, Misguided Promise gathers up their meager discography - the eleven-song Waiting For No One (originally minted on What Goes On Records), two eps, a pair of outtakes, and a fun live medley of the Damned's "New Rose and MC5's seminal "Kick Out the Jams."  Tim Boykin would later form the (slightly) more mellow Birmingham power pop congregations the Shame Idols and later The Lolas.  I'm leaving you with the opening salvo from the CD, which coincidentally is the title track of that fine lone album, Waiting For No One, as well as a live cut from a 2007 Carnival Season reunion show.  Buy Misguided directly from Arena Rock, Amazon or digitally.

Waiting for No One
Please Don't Send Me to Heaven (live)

thank you for bringing such great news

I love Tim's work, but this one slid right under my radar. Thanks for the heads up!