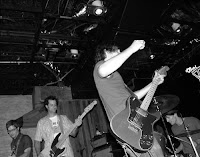 In March of 2009 when I offered up Grand Champeen's out-of-print debut, Out Front By the Van, I spoke of  them as a "Whiskeytown cum Soul Asylum sonic amalgamation."  When they toured for their next and finest album, Battle Cry For Help, I attended a couple of their shows.  In fact, in the midst of one of those gigs I thought it couldn't hurt to yelp out a request for say, a Soul Asylum cover.  They could have ridiculed me.  They could have ignored me.  Or, they could have played a damn Soul Asylum song...and luckily, they obliged.  I want to say "Cartoon" was the title in question, but don't hold me to that.  It turns out my suspicion of Grand Champeen worshiping at the alter of Pirner & Co. was confirmed many times over to a very lucky Minneapolis crowd in the spring of 2006, when they proceeded to do their best impersonation of a Soul Asylum tribute band for close to two hours.  Now, you might say why put on such a production for the very town Soul Asylum reside in?  In short, G/C stuck to the band's earliest material (i.e. the Twin/Tone and A&M albums), virtually as if Soul Asylum called it a day after they released And the Horse They Road in On.  These days, we're blessed if the real McCoy plays anything at all prior to Grave Dancers Union.  Even in the twin cities, Grand Champeen came to the rescue to fill a very prolonged void.

This show is culled from an audience tape, but a decent one at that.  The track list speaks for itself.  Perhaps this was just a one-off gig, but if that's the case, to see and hear such an unlikely concept come to life must have been a colossal treat.

Very nice. Good to see my Champeen homies getting some love. The Adios Lounge gives you its full support for offering up this great show ... and tweetage, for what it's worth.

wow- i gotta hear this!

I was at the show (and have a copy of it), it really was an awesome time, and a great treat. I love Soul Asylum, and they're my favorite band ever. I am also a big fan of Grand Champeen, and remember going up for two shows in one trip. I drove up for the Soul Asylum show 3 days prior to the Champeen tribute show, and then stuck around at a friends house for a few days until the champeen tribute show. It was absolutely incredible. I'm just kicking myself for not staying another day for champeen's own set.

Good call. I recently dusted of a Soul Asylum gem...elliottchoices.webpress.com .