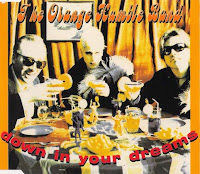 Ok, here's the skinny.  The Orange Humble Band was a collaborative effort between Darryl Mather (half of the creative force behind Australia's jangle-pop wunderkinds The Someloves, as well as a former Lime Spider), Ken Stringfellow of Posies/Big Star renown, and Mitch Easter, Let's Active leadman and producer extraordinaire.  While not a full-time proposition for anyone involved, OHB was technically based in Australia, but their debut album, Assorted Creams was gestated at Reflection Studios in North Carolina in 1996.  Mather had written the album, virtually in it's entirety, before the involvement of Ken and Mitch.  The ensuing Assorted Creams was recently regarded as one of the most crucial power pop albums of all time, even cracking the top-ten of the Shake Some Action - Ultimate Power Pop Guide album list.

The group's revered lineup speaks for itself, and although Assorted wasn't as thoroughly revelatory as some might purport, it housed some of the finest songs the genre had to offer in the '90s including the deliriously indelible "It's Rainin' Like Soft Fun," "Can' Get What You Want," and "Down In Your Dreams," the last of those songs being spun-off as the title track of this ep which featured an additional four non-LP nuggets.  OHB issued a follow-up in 2001, Humblin' (Across America), and you might say that Down in Your Dreams was issued to tide over fans who couldn't get their fill of Assorted Creams).  Incidentally, Power Pop Criminals shared Mather's original 1994 demos for Creams a few months ago, and is worth investigating whether you've been acquainted with the album itself or not.

The first Orange Humble Band album is one of my all-time favorites. The 4 bonus tracks on this EP could have easily fit in on the first as well. They're that good...

Just one small correction...rather than being "gestated at Reflection Studios", Mather had not just written, but had actually recorded the album in its entirety back in Australia - with a band who'd spent up to five years working on the songs with him, and whose significant contributions to the album he deliberately chooses to downplay in favour of talking up the big names he paid to be involved - a year earlier, before taking the tapes to Reflection to have Stringfellow and Easter record their contributions.

Thank you for this post. I think this is an amazing band.

Please re-up. Would love to hear this.