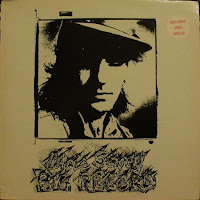 You might say I was inexcusably late to learn that Chris Sievey (aka Frank Sidebottom) frontman for the should-have-been-pioneering British power-pop act The Freshies had died of cancer on June 21 of this year, shortly after being diagnosed.

Sievey made a name for himself in the '80s as the paper-mache costume-adorned alter ego known as Frank Sidebottom, a favorite of British comedy television, but whose career had run it's course some time ago.  Prior to this somewhat bizarre metamorphosis, he turned the head of John Peel in the late '70s via a self-released Freshies single.  The Freshies made modest mainstream inroads with the gimmicky, but endearing "I'm In Love with the Girl on the Manchester Virgin Megastore Checkout Desk" in 1981 (later changed to "...Girl on a Certain Megastore Checkout Desk" for reasons that are probably obvious).  This led to a major label contract and many more Freshies singles, but no full length to speak of.  Nevertheless, bristling and harmony-laden jewels like "Wrap Up the Rockets" and "Tell Her I'm Ill" were the stuff of genius.  Alongside "I'm In Love..." another key single concerned an elusive Teardrop Explodes record ("I Can't Get 'Bouncing Babies...").  Ultimately they were all but forgotten of in the UK after fizzling out in 1984, and made barely a ripple stateside.  In fact none of their singles were released in North America, nor was the profoundly flawed but still necessary 1996 anthology on Cherry Red Records, The Very Very Best of...Some Long and Short Titles.  I say profoundly flawed in regards to Cherry Red's decision to master about a third of the compilation from excruciatingly crackly vinyl in lieu of seemingly lost master tapes - that and a real shoddy editing job in spots, plus the decision to go with the revised version of "Im in Love..." instead of the more winsome original.  A full length Freshies tape, All Sleep's Secrets was issued in 1979, but no one has come forward with a copy as of this writing. 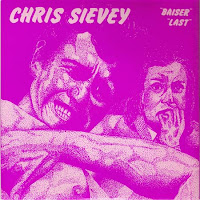 Prior to his ticket to stardom a la the Frank Sidebottom character, Sievey wrote and recorded regularly as a solo act, releasing several singles, some unspeakably rare cassette albums (that usually go for a minimum of $100 on Ebay) and this album, Big Record.  On Sievey's solo material, the often punky overtones that made the Freshies such a succulent treat had subsided, in favor of a mellower singer/songwriter tack.  Given its faintly baroque touches and idiosyncrasies, the overall tenor of Big Record hovers in the soft-pop realm, with British new wavers the Korgis being perhaps the closest comparison I can offer (not that comparisons are needed mind you).  The epic-length, 23-minute "More Red Indian Music" occupies the entirety of side two, though in practice is hardly grandiose.  Catchy enough though. As the sticker on the album jacket indicates, this record came with an accompanying single that I've padded on as well.

Whether Sievey's Big Record puts you in a tizzy or not, the Freshies in all likelihood will. For the uninitiated, you can acquaint yourself with them here and here.  If you're already sold on the Freshies and have familiarized yourself with the "hits," blogger Mr. Obscure has prepared a tribute blog to the band, and more specifically has assembled a collection of tracks culled from the Freshies Razz Records singles releases that makes a great companion to the The Very Very Best of... compilation noted above.

A. Baiser
B. Last

There was a dutch radio programme that would play "I'm In Love with the Girl on the Manchester Virgin Megastore Checkout Desk". I was about 13 when I started to listen to this programmme (called Rauhfaser), liked the song but never found out the name of the band until years later. And then being surprised about the Frank Sidebottom connection.
RIP Chris.

I've no idea if you're still willing/able to re-upload these - but I'd be fascinated to hear these (I'd just reading the book 'out of his head' about Chris Sievey, and would like to hear this bit of his bit of his career!).

Could the link be updated again? Would love it hear :)