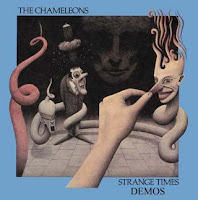 Not too many hours from this hour (about 44 as of this writing) my little mind was irretrievably blown away by a Mark Burgess performance at the Bell House in Brooklyn, NY, which closed-out Big Takeover Magazine's 30th Anniversary Festival  Accompanied by four young(er) guns, Burgess and his crew tightly and efficiently blazed their way through roughly fifteen Chameleons classics with an intensity that equalled, or in my opinion even trumped that of his original band of yore in their '80 heyday.  When I initially saw his name on the lineup a couple months ago, I assumed he would be performing all by his lonesome, bearing only a twelve-string acoustic guitar at most.  Boy, was I in for quite a mind fuck that night.  It will no doubt go down as one of the finest and most captivating performances witnessed in my life.  If you're signed up on the bit torrent site, Dimeadozen, you can hear if for your own ears in fact.

Since I'm still so buzzed from that riveting gig, I've decided a Chameleons post is warranted, specifically the demos for their third and final platter with their original Thatcher-era lineup, Strange Times.  More lucid, grandiose and measured than it's predecessor albums, Script of the Bridge and What Does Anything Mean Basically?, Times was nonetheless as visceral as '80s rock came - commerical, "alternative," or otherwise.  You're treated to twelve tracks here (with "Time" being divided up into two parts), including the iconic "Swamp Thing," and my favorite, "Ever After."  Speaking of Chameleons demos, the 2009 deluxe reissue of What Does Anything Mean includes a bonus cd of nine demos specific to that album. Find it on Amazon.

The storm comes...or is it just another shower?

no truer words..... have I ever seen written.


this is MIke P. (regular writer for the Big T. and criminal-obsessive, Chammies fan)

Going in? I had loooow hopes,as I was not too impressed with his (then)pick-up band @ Bell House in 2009.

I felt weird brain chemicals drip..that I never knew existed (*or have not been dumped out n' down my spinal chord since the days of wine and major ecstasy.... but enough about that profligate sh... )


saturday night may have to rank as THE single greatest show I have ever been to in my entire life.

love your blog for years, BTW!

oops. spelling is my forte. I simply cannot type for shit.

Hey, thanks for posting the onote about the show. Because of it I went to see him in Philly on Saturday and you were right, it was totally fantastic...

Fifteen songs!! I'm wishing I would have shelled out to go the show now. When Burgess & Lever & Second Skin opened for The Comsat Angels last year they only played six songs but they were a great six songs. And I suppose their set ran a good 45 minutes, ha!

And thank you so much for posting these! While I love 'Strange Times" it does suffer from some heavy 80's production. It's the one Chameleons album that could use a remix/remaster/rerelease.

Comparing the finished album to the demos will be interesting.

all i can say is "you lucky swine"-never seen 'em but i definitely inhabit a parallel universe where Echo&TheBunnymen struggle for recognition(not that i have owt against them)and The Sound and Chameleons make it BIG...heheh