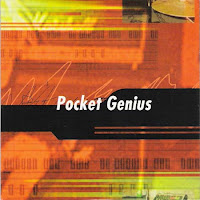 Recently had a request for this one.  Hailing from Minneapolis and featuring at least one Porcelain Boys alumni in their lineup (namely drummer Jason Knudson), the pop-punkin' Pocket Genius laid down some tracks in the early '00s for this ep, and a full length, Tundra Rock, released on the venerable British label Boss Tuneage.  The band went on hiatus not longer after these recordings, but regrouped in 2009 for some gigs.  Pocket Genius don't quite harken back to the rather genius themselves Porcelain Boys, but instead rock out a la Big Drill Car, not to mention a bevy of admirable, but barely known "popcore" acts like Alligator Gun, Huffy, and G-Whiz.  The band blogs (albeit infrequently) but their Myspace page is a little more revealing, and reports that the band is working on new material.

Since this disk appears to be available from a couple of notable digital online retailers I'll probably be leaving this up for a limited amount of time.

Current line up does not have Jason in it. I haven't listened to this one in a number of years, but it used to be in steady rotation for long time. great record, and great post!

Thanks for the post! The follow up to this record is Tundra Rock, feel free to put that up if you like. After a 8 year break we will be releasing another record soon, you can hear a few of those tunes on our myspace page. Also, thanks for posting all this great obscure stuff from the past. I am really enjoying some of the old pop punk stuff like GWhiz and Man Dingo as wells the live Church tracks, close lobster demos, blake babies, Tommy Keene..what an awesome blog.

Wow, this is great! I'd love to hear more.