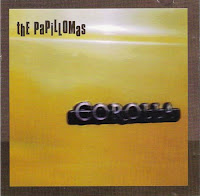 Had a request for the first album by the Nanaimo, BC-based Papillomas, and here it is.  Corolla managed to stradle the scrappier side of Maritime province bands like Eric's Trip and early-Thrush Hermit, but also had a toehold in the Chapel Hill indie scene of it's day.  Not long after the release of Corolla, the Papillomas bashed out the significantly more sophisticated Twice as Early as You'd Ever Want to Be There and the finale ep, When Years Were Bee Stings in 2001, both of which I shared awhile back (just click on the titles).  Corolla closes shop with an unlisted and very amateurish stab at Loverboy's "Working For the Weekend."  You have been warned.

Crazy. I listened to this on the way home from work today. Don't remember where I picked it up, but thanks for sharing it. It's reeeeallllly good!

Any chance of a re-up on this release. This is the one i have been searchin for. I come up emty all the time

Any chance of a re-up on this release. This is the one i have been searchin for. I come up emty all the time

I would love it for this too! Not to mention the other albums. I have the other two CDs but they are in poor shape and I can never get a good rip!

I actually have two unreleased tracks from them, because my brother was in the studio when they were recording!

The link has been updated, Keep checking back for the other two. They were really excellent.

Thanks man! I really appreciate it.

I have both albums and the EP - ripped. Great stuff! Let me know if you want them....tripmush at gmail.com. Would love to hear those two unreleased tracks...