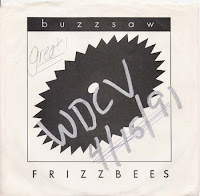 If it's not abundantly clear just from a cursory glance of the rather butchered picture sleeve, this 7" was previously in the possession of a radio station (most likely one of the college campus variety).  Sorry about that, but if you're willing to shell out a few dollars you might be able to obtain a cleaner copy (and perhaps a clearer conscience, but more on that in a moment).  The Buzzsaw Frizzbees were an Ipswich, Mass trio who had a solid command of the intricacies, and for that matter, majesty of power pop.  Three songs comprise this wax, and nary a second is taken for granted.  The mid-tempo, steady as she goes "Angels Sent Me" is quintessential, Teenline compilation style guitar rock that can stand toe to toe with anything the Smithereens and Diodes ever pumped out.  They up the ante a tad on "Pretty Soon," wherein a Ramonesy, Road to Ruin-era thrust invigorates the proceedings to maximum effect and enjoyment, while the comparatively slow-burning flipside "Won't Take Long" actually takes the longest of all three numbers here.

Click on the hyperlink above to be ushered to the Frizzbees makeshift website, which will provide info on how to obtain your own copy of the record (limited supplies available no doubt), as well as CD-R featuring these songs as well as ten or eleven more.

hi here's a link where you can listen, dl or buy the eveden's latest ep

Looks like the single from what I can tell.

Do you have the CD? If so, could you post it?

Just for laughs I looked up WDCV, it's the station for Dickinson College in Pennsylvania.

ahha my dad was in this band !