Way back three years ago when this thing of mine called Wilfully Obscure kicked off, I introduced some of you to a long departed Toronto band, the Numbers, and more specifically their debut Add Up for the upstart Basement Records imprint. Technically that debut would be their only album, at least under the Numbers moniker. 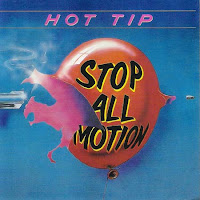 For reasons unbeknownst, not to mention barely understood by me, Basement Records mutated into Attic Records in 1981, and with the label revision, the band opted to re-sign with Attic under a new name, Hot Tip.  Not an inappropriate move I might add, because although the Numbers and Hot Tip were dyed-in-the-wool power-popnics the original incarnation of the quartet possesed a slightly more angular tack than Hot Tip's ever so subtle radio-friendly gleam.  Furthermore, H/T took their cues from a pool of more traditionalist forerunners like The Records and Pezband, and managed to update their panache to propel them more in league with say, The Cars.  Unfortunately Tip only lasted for a pair of singles and the Stop All Motion album, which listening to in hindsight impresses enough to have earned it's rightful slot on the Shake Some Action - Ultimate Power Pop Guide Top 200 LP honor roll.  Too bad this jewel slipped through the cracks.