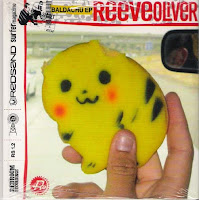 Until I get a chance to digitize more vinyl and/or treat you to a live show, I thought I'd follow-up my Reeve Oliver post from a couple years ago.  To pull a few quotes from my write-up for the trio of self-released eps I shared, Reeve Oliver are a power-trio from San Diego specializing in LOUD, riff-roaring power pop that in my opinion nearly outdoes much of their ever-lovin' contemporaries, specifically Weezer, Foo Fighters, and Superdrag. Singer/guitarist Sean O’Donnell coincidentally recalls Kevin Ridel of Ridel High/AM Radio renown. Reeve Oliver was initially a solo vehicle for O’Donnell, but he eventually teamed up with drummer Brad Davis, and more notably, Otis "O" Barthoulameu, helmsman for the vigorous San Diego punk-pop act, Fluf.  The band's self-titled long player dropped in late '04, but in addition to the aforementioned eps was the commercially issued, six-cut Baldachu , featuring a pair of album (incl my favorite, "Want Burns") plus four songs exclusive to it's release.  Baldachu has sold out, but thanks to modern technology you may listen to it in it's entirety at your leisure.

One of my all time favourite bands. I had some old and unreleased stuff up on my b-sides blog before it got shutdown (again). I can repost it if you or anyone else wants it.

Hi Josh, Would love to hear whatever you have. If you happen to have any original copies of the eps I posted a couple years back, I could probably use a better rip than what I have now. Thanks

Unfortunately I do not, would love to have some decent rips of them as well. I do have two tracks they recorded for an unreleased Juliana Hatfield tribute album however. Plus the bonus tracks from both full lengths.

I've got the Hatfield covers, the bonus tracks I'm not quite sure about.

All different recordings from the EP versions.