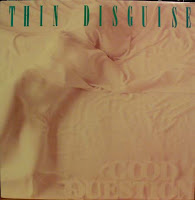 You're clearly forgiven if you mistook the name of the artists that crafted this platter as Thin Disguise, but in fact that's the LP title, and it's makers are in fact Good Question.  Though they're pictured as a quartet on the back of the album jacket (and actually recorded with two more fellows), to many of you Good Question's lineup may as well begin and end with frontman Van Duren, a classicist pop singer/songwriter responsible for his much lauded solo debut, Are You Serious? in 1977.

A denizen of the '70s Memphis music scene, who was not only in cahoots with Big Star's Chris Bell and Jody Stephens, Van Duren went so far as to audition as a guitarist for Big Star, but ultimately that wasn't in the cards.  By the mid-80s, Van Duren's McCartney-cum-Emitt Rhodes aplomb had taken a back seat, and his new vehicle of choice was Good Question.  Thin Disguise boasts the plush, airwaves-groomed sound of it's era, gunning just shy of Casey Kasem’s weekly honor roll, while managing to keep much of it's fragile credibility on the same page as it's rather obvious commercial aspirations.  There's some faint new-romantic gestures cropping up on "Girls In Uniform" and "The Couple Most Unlikely," but Thin Disguise is at heart a hook-savvy, but meticulously polished '80s pop/rock record that didn't have the corporate backing to accord it with the en masse push that would have made all the effort worth it.  The album was reissued in 2001 on the Japanese Airmail label with five bonus tracks, but I have not been able to avail myself of a copy.

I'm no longer hosting this.  Please purchase through Bandcamp.
Posted by spavid at 7:46 PM

If the link becomes available again for the CD release let me know. Thanks and Cheers

Hello , just saw it here but the link is down . Is it possible to re-upload this gem . Would love it so much .