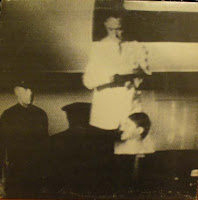 Here's an obscurity that truly lives up to that lofty pedigree.  The front of the jacket bears not a single word, the back merely states the group's moniker.  No insert, with the tracklist confined strictly to the record labels, which also list a production/engineering credit to former Zero Boy/Datura Seed Paul Mahern.  Not another shred of info, no pics, copyright date, nothing.  Zip, zero, squat, bupkis. To cut to the chase, the Math Bats were a mystery band of the highest order (which of course spells grist for Wilfully Obscure). Fortunately, the ever useful Indiana Music Archive online has a listing for, and MP3s by the band, who were apparently situated in the environs of Indianapolis.  Records As I Buy Them blog has a few words to parse on this ep, and cites The Bodines and Slint as potential Math Bats influences, but save for the bouncy opener, "Guessing Games" I would argue that they gravitate more in the direction of brooding, '80s Midwest indie acts like Breaking Circus and Bloodsport.  While we're at it, five bucks says these guys wore out a copy or two of Unknown Pleasures.  Some light "goth" undercurrents are at play here as well, but I don't suspect anything too deliberate.  If this ep gets your joint rockin', head over to the Indiana Music Archive linked above for songs from an unreleased second album.  The ep is there too, but these rips were taken straight from my vinyl copy.  So there.

Great post..after reading your review, I promptly went out to find and procure this obscurity and your assessment was spot on...a great obscurity that fits nicely in my collection...well done....

I saw Math bats a few times at the No Bar and Grill in muncie.

I think They appeared on one of the bob chaos cassette samplers as well.

Thanks for the nice write up. I am the drummer for said Math Bats and can answer any ?'s you may have.

There's an insert in my copy.

There's an insert in my copy.

Theres an insert in my copy too, bought new in 198whatever. Great record!

I won’t use the same terminology as the drummer for “said Math Bats”, opps, I guess I just did, as I’m sure he would tell you, I along with countless millions were adoring admirers of his. But I digest. He and I are no longer on speaking, aka typing terms, for whatever reason, other than, and he actually would readily admit that is is “the biggest @$$hole this world has ever seen”. Anyway, I was the bass player, and/but while I understand this article is a review of the EP (and Putz may have already sent you a copy of the unreleased full album), and you may have posted this info elsewhere, but we were blessed to have opened for anyone who was someone in “new music” back in the day. And most of them spent the night afterward (gratis of course). We’d sit up all night and watch obscure movies or music videos. Very fun. Gosh, we had the Meat Puppets, Husker Du, Minutemen, and countless others I’m not remembering hang out at our house. What a blast!