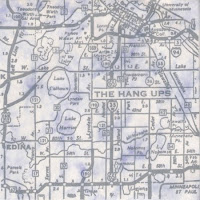 The Hangs Ups were a '90s indie pop troupe from Minneapolis, who bore a sound resembling The Gigolo Aunts a whole lot more than celebrated hometown predecessors Husker Du and Soul Asylum.  The A-side here, "Top of Morning," is about as quintessential and delectable as their genre of choice had to offer in the mid-90s, while the acoustic flip, "Wishin' I Was a Plane" is notably more intimate.  If this is to your liking, I'd also recommend their So We Go cd, which you can get directly from the label that minted it (Clean/Twin Tone), or for a bargain basement price through Amazon.  There's a bio on the Hangs Up here, and a Wiki entry as well.

A. Top of Morning
B. Wishin' I Was a Plane

nice! great band, all their cd's are worthwhile

I love "So We Go", but even more 1999's Don Dixon produced "Second Story". Unfortunately by the time of 2003's "Hang Ups" they seemed to have lost the spark, undoubtedly due to continued obscurity. I sure miss these guys...

would you re-up, please?