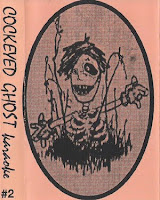 For roughly fifteen years now, I've been charting, or more literally, enjoying the steady musical output put forth by one Adam Marsland.  Truly one of the last great hopes for genuine singer/songwriter talent around these days, Marsland graced his way onto my radar with his band Cockeyed Ghost's debut CD, Keep Yourself Amused, which came courtesy of the sorely missed Big Deal Records imprint.  That was in 1996, and as Marsland and his rotating cast of Ghosts would perfect their pummeling yet profoundly sentient brand of power pop on 1997's Neverest, and The Scapegoat Factory two years later, even greater things were to come.  In fact, I'm just as much a fan of his subsequent solo releases (which I'll discuss in further detail in a moment), but those early C/G albums exuded an unparalleled amount of visceral fun.  When I learned that the group's Karaoke tape from 1994 was still available, I jumped at the chance to see what I had missed.  Though it was preceded by another cassette, 4-13-94, Karaoke was their first set of recordings in earnest.  It contains demo incarnations of three Neverest cuts, "Dirty Bastard" which would soon appear on Amused, and another cut that would eventually find a home on a C/G rarities album.  Ultimately the album versions of these songs surpass those on Karaoke, but as wordsmith for the group, the seeds of Marsland's wit, angst and passion were firmly sewn into place on this potent batch of five tunes.  A killer knack for melody didn't hurt either.

Adam Marsland built his audience the old fashioned way - one listener at a time, and when Cockeyed Ghost were put to pasture around the turn of the millennium, his followers were more than happy to stick around.  2009 marked the release of his second solo studio album, Go West, an expansive two disc undertaking wherein our man takes such capricious forays into soulful piano rock, house music (wtf?) and even a relatively obscure Damned cover, “Stranger on the Town.”  Amidst all of these disparate detours, there's still plenty of his more traditional three-chord pop 'n roll.  More recently, unleashed this January in fact, was an originally very limited edition CD called Hello Cleveland, which has fortunately enjoyed wider release on Amazon.  Recorded on the fly in a single day while Adam and his Chaos band were on tour in the Midwest, Hello Cleveland was a spontaneously written album containing fourteen new songs that at first blush are seemingly (and deliberately) frivolous, but upon repeat listens are actually quite revelatory and substantive, not to mention oodles of fun.  Enjoy the tape.

I have to admit I have liked them better "in concept" than in reality. Not quite loose enough for me, but their best are among my favorites.

Hi, please re-up!
Don't know how I missed this one when first posted..

You should post one of their full albums, they're almost impossible to find online and you can't buy mp3s anywhere.