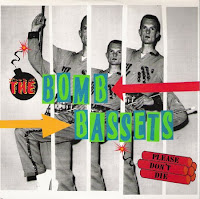 Though it was a pure coincidence, just as this Bomb Bassets wax was hitting shelves (at least a few shelves anyway), I had just familiarized myself with frontman Dallas Denery's previous endeavor, Sweet Baby (formally known as Sweet Baby Jesus).  Sweet Baby's one and only official album, It's a Girl, initially saw the light of day on Slash/Ruby Records in 1989, and sank without a trace until it was resuscitated by Lookout! Records in 1996.  The East Bay quartet melded an unshakable beat-band awareness to a considerably more hep punk-pop aesthetic, delivering such succinct yet indelible two-minute salvos as "Andorra," and "Baby Baby Baby Baby Baby Baby Baby I Love You." (no typos).  By the mid-90s, Denery caught the music bug again, and forged the Bomb Bassets with the enlistment of Mr. T Exerperience luminary Dr. Frank, renown Bay Area punk producer Kevin Army (who's numerous credits can be browsed by clicking the link), and Dallas' younger brother, John Denery (formally of Brent's TV). The Bassets charted a similar, retro-fitted course as Sweet Baby (generally sounding like one and the same), with a little more of a garage rock scrappiness for good measure.  This single/ep was followed up by a 1997 album, Take a Trip With the Bomb Bassets, also courtesy of the ever insolvent Lookout! Records.  Perhaps more to come from Sweet Baby on Wilfully Obscure in the coming months.

Check Out This Car said...

Hi, I'm sorry this is unrelated, I posted under Tommy Tutone but was afraid you wouldn't see it. I just was wondering if you had larger, better resolution pictures of the national emotion cover art. I'd appreciate it. Thanks

WOW! It's A Girl is one of my favorite albums, and unfortunately the Lookout comp with their unreleased tracks didn't really shed more light on the band. All 4 songs on this ep could be long lost Sweet Baby tracks, with a more mature Dallas singing. Can't wait to see what else you have in store!

These are awesome, but the record is still in print.

reup please. Many thanks !