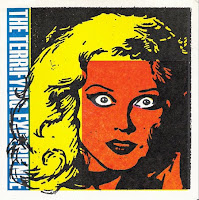 Any Guided By Voices devotee, even of the casual variety, will attest that the core nuclei of Dayton, OH's boys done good consisted of Robert Pollard and Tobin Sprout, at least on such particularly legendary albums as Propeller, Bee Thousand, and Alien Lanes.  Another piece of the puzzle during GBV's '90s halcyon years was a gentlemen named Mitch Mitchell (not to be confused with the deceased skin pounder for Jimi Hendrix who went by the exact same name).  During his tenure with GBV, which actually stretches back to the mid-80s, Mitchell not only served as a guitarist and bassist, but co-songwriting conspirator with Pollard on many songs, outlined per the gloriously anal retentive GBVDB. In 1996, he assembled a band of his own, dubbed Mitch Mitchell's Terrifying Experience, or more simply the Terrifying Experience.  If you're expecting a low-rent variation on GBV's lo-fi aesthetics and esoteric musings, this single is not likely to comply with your assumptions, though middle-of-the-road it ain't.  "One After the End" beats the flipside hands down, but take a listen for yourself.  More text can be found on the remainder of the Terrifying Experience's discography over here.

A. One After the End
B. Hollis Put His Hands Around My Neck

Would love to see the Terrifying Experience split 7" with Illyah Kuryahkin...been trying to get hold of that electronically for ages...
Thanks for providing great listening!

I have it, so just hold out a little bit longer.

Do you have the soundtrack with Mitch Mitchell's Terrifying Experience and I.K. on it? Do you want it?

I'm afraid I know nothing of the soundtrack you speak of Todd. Feel free to elaborate. If it's an all instrumental deal, I'll probably pass.

these dudes are friends of mine. i'm sure you've heard about the reunion tour coming up. i didn't think anyone cared about t.t.e. i'm sure duane will be amused when i tell him about this post. i know i am...