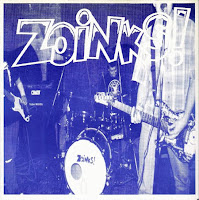 Quite simply, Reno, Nevada's Zoinks! were one of my top-ten favorite bands of the '90s.  An ace popcore trio, Zoinks! were leveled with numerous comparisons to Green Day, and while the similarities were considerable, they beat Billie Joe and Co. at their own game, in colossal fashion I might add.  Though they recorded only one proper album with vocalist Zac Damon (1995's Bad Move Space Cadet) there was also a batch of singles and splits committed to vinyl, this being one of them.  Their two contributions here, "False Face," and "New Shoes," both shining examples of their slow/fast/slow dynamic agility are only the tip of the iceberg of an extremely consistent, albeit brief recorded catalog.  In addition to Space Cadet, the "Zac Years"are further accounted for on the crucial Stranger Anxiety singles comp, featuring the aforementioned cuts amidst a bevy of other songs that raise the pop-punk bar to it's highest echelons.  I specify the "Zac Years" as such, due to Mr. Damon's departure from the band around '96.  The Zoinks! catalog can be obtained through the band's official page (linked above), as well as online outlets including Emusic, itunes, and so forth.  You can sample more music on their obligatory Myspace page.  As for the rest of the band's history, hit their bio up for all the juicy details. 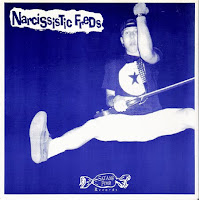 The other band occupying this 7", the Carson City-based Narcissistic Fred's were impressive in their own right, dishing out a trio of dizzying delights, including a crème de la crème hook-fest titled "Fix," that closes out their side of this wax in superb fashion.  Another Freds 7" is for the taking at One-sided War blog, though it's sleeve is a bit daft.  Enjoy.