Built By Animals - a brief evaluation 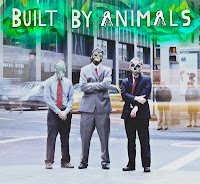 If Brooklyn, NY isn’t ground zero for upstart indie bands these days, then I’ve got a certain bridge to sell you. Unlike the bulk of their borough brethren however, I can’t picture Built By Animals tripping over themselves to be the next poster children for online tastemakers. Hipsters? Shmipsters I say. Not that I second guess their ambitions of course, but this trio are vying for something a little larger then their collective ego and a choice slot at SXSW.

BBA exude the type of songcraft that sounds like the product of a band with twice the personnel. More significantly their songs have a tendency to transition between near-cinematic grandeur to something, well, a bit more lackadaisical. This lends a slanted and enchanted irony to a selection like, say “Return to the Power Kingdom,” though said irony is in all likelihood unintentional. Built By Animals sonic aspirations are generally rooted in the same crooked headspace as recent Radiohead and Built to Spill, and that coveted strain of savviness alone has the potential to lure in scores of refined eardrums. On their eponymous ep, flourishes of limber, arpeggiated guitar licks abound – a facet not anomalous amongst their contemporaries, but the placement sounds wholly appropriate. Unfortunately, Built By Animals catalog at present is a slim one, but physical copies of their ep are easily obtainable from the band, and all four songs can be streamed on their website and Myspace page.
Posted by spavid at 8:26 PM

I'm loving this, will have to pick up the EP.