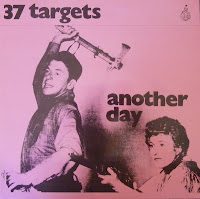 Until I get the opportunity to rip some more vinyl (which should be very soon) I thought I'd share another album I obtained from the late, great Feelin Kinda Froggy blog. My firsthand knowledge of 37 Targets is pretty nil.  They hailed from Chatanooga, TN, and in addition to recording Another Day with renown producer Don Dixon, they had a video that received a spin or two on MTV, back when that station wasn't so petrified of bands signed to small indie labels (and for that matter when MTV played music videos period).  Nothing particularly fascinating here, just you're standard synth/guitar rock of the era, packing a dose of that all so crucial "edge" with mainstream potential aplenty.  Could this be Tommy Keene moonlighting with The Truth (anyone remember them)?  Or how about Dreams So Real had they gone more commercial?  Apparently, Another Day was released on a German record label, but I'll be damned if I know the story on that. BTW, thumbs down on the Johnny Cash cover.

Have The Truth "Playground" sitting in my vinyl collection. Man, did they want to "look" like The Jam....

Never would have guessed Angelo. Thanx

Hey! Don't know if you still respond to this strand on 37 Targets but I was and still am close friends with them. The album was released in France and Germany titled "Another Day". They re-released it in the US on their own label, Skippy the Healing Pig, under the title "And It Burns". The were mainly a frat band that worked the southeast region of college campuses, which are plentiful with fraternities and sororities. At that time, college radio/alternative radio was actually alternative and 37 Targets were one of the most sought after bands on that circuit.
Through that they met a promotor that wanted to release their album in Europe and set up a tour. The guys went for it but it didn't quite go as planned. Once they got there amp pressed the album, the promotor failed to follow through with the promised tour dates and they were all broke.
With no money and no way home they decided to make the best of it and began booking themselves wherever they could. They had some success there and toured for several months before returning to the US.
They had a personel change in drummers and released the album in the US and went back to promoting it on the college campuses. During this time they released a new single called "Rock Scissors Paper. A friend they net on the road wo was a film major asked to make a music video for the song which they did. That video was submitted to a program on MTV called Basement Tapes which featured independent bands. It was an American Idol format where the viewing audience called in to vote for their favorite. On the night 37Targets video was played, they won. They played together for another couple of years and then broke up.
They were a great live band with a lot of energy! All of them were fantastic players and, as a band they were very creative out of the box artists. I disagree with you on Ring of Fire. It's a sophisticated out of the box arrangement...and it grooves! It was awesome live as were they.

Unbelievable. I've still got And It Burns in my LP collection from a quarter-century ago when I first moved to Chattanooga. I recently had a friend record it to MP3 with his USB turntable. Sadly, the quality of his recording just wasn't that good. On a whim, I turned to Google and found this post and your offering. What a great find. Have already forwarded the link to a friend of mine. Back in the day, we'd catch them live at a bar called Yesterday's on those rare occasions when their touring brought them back home. Thanks again.

can you upload please the link is deleted
thanks

can you upload please , the link is deleted thanks

I was in Knoxville during their heyday. I saw them first at the urging of my Chattanooga friends but after that sought them out. They were originally called "Targets" but had to add the "37" later. They were an incredible live act. The record does not do justice to how good "Ring Of Fire" was played live. And they were doing it years before later alt-country bands took it up. Thanks for posting!

Can you re-up this one please? Thanks in advance. :)

So my girlfriend found a copy of this (the German version) online and decided to buy it. I hadn't thought about this in years and so went searching myself, and ran across this site.

I'm Geof - I played guitar and sang in 37 Targets. The story on this release is this:

We were from Chattanooga, and played colleges and bars, mostly in the Southeast. Don Dixon had just finished working with Mitch Easter on REM and so we called him up and asked if he'd produce ours.

Our drummer was from Huntsville, and had a connection with a studio there. We recorded the record in 5 days in 1984. We released the US version independently, it was called "And it burns."

It was picked up by an independent French label, and re-released in the Belelux countries under the title "Water from the Moon." Based on that release, we went to Europe in 1986, with the intention of touring the record through England, France, Holland and Germany.


However, when we arrived in England, we found that the promoters had not booked anything. We scrounged around and played a few times, and then went to Paris where our label had booked a couple of dates to release the French version.

This is the German version, and it was picked up and released completely happenstance. After Paris, we had gone to Germany thinking that a German promoter had booked club dates in Dortmund. Due to our manager's completely crap grasp of the German language, there were no dates. We scrounged some more, played a couple of times, and ended up running into the percussion player for a German group called Philip Boa and the Voodoo club.

He took a liking to us and put us up in his apartment for a while. He turned us on to his label - Jalosie Records - and they picked it up for release in the German speaking countries.

This was in June of 86. It turns out that in Germany, everyone goes on vacation to Greece or Spain for the entire month of July. Which meant that there was no club work. At all. Since our new found host and his friends were going to Spain, we decided to follow them.

We ended up living in a campground on the Costa Del Sol for about six months. We ended up playing in Granda, Motril, Valencia, Barcelona, Madrid and a few other places.

All in all it was one hell of an adventure, but it completely broke us. We came back to the States and played for a couple of more years. We did win the MTV Basement Tapes competition. The prize for that was rotation on MTV for one month (which turned out to be once per week on Sunday mornings @ 3 am) and a guitar shaped like the Budweiser logo.


The drummer ended up moving back to Germany and became part of a group called TASS (The Apple and Snake Sensation.)
The keyboard player ended up losing his mind.
The bass player and I had a band in the 90's called Mouth Full of Bees.

Re-upload this please! Thanks in advance!