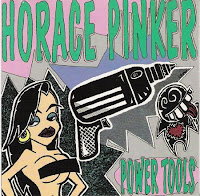 My fixation for revisiting arcane, mid-90s punk continues, with the addition of the debut platter from Tempe, AZ's Horace Pinker.  Taking their name from the villain in that lame ass horror flick, Shocker, it would take a few years for the trio to perfect their breakneck strain of semi-melodic power punk (they arguablyly peaked on their second album, Burn Tempe to the Ground) but Power Tools is a smart and robust opening salvo.  Face to Face and Avail followers can't go wrong with these guys.  Amidst roughly a dozen originals on Power Tools, the boys put their spin on a classic, "Our Lips Our Sealed," and a far more obscure favorite of mine, the Rhythm Pig's "Can't Change the World."  Here's a few words regarding this album straight from the band's website:

our first effort at a full length album saw the rehashing of many of our older songs from our first two seven inches. we re-recorded some songs and simply put the extant recordings of 'knives, guns, and ammo' into the mix. this became a pattern that was hard to break, as we wanted to put our favorite songs on our full length albums, yet many had already appeared on seven inches and comps. alright, so get over it, some of our songs appear on many of our various releases. power tools in many ways is our most diverse and our most representative album, starting with speedy pop punk and going on to some harder-edged 'emo' songs. my favorites are probably 'no thoughts' and 'sixty-seven cents' but the best thing about the album is that there's a song on there for everyone, even a go-gos cover. if you can find it, buy it, the label (justice) went out of business. -scott

I first became aware of Horace Pinker when they played against Doc Hopper during a 1994 WFMU Pat Duncan broadcast (which you can listen to here : http://www.wfmu.org/playlists/shows/17937).

Consequently I picked up the Power Tools LP and it really was a favorite of mine, although I haven't heard it in ages. Thanks for sharing and sparing me the digitizing!

Nice Blog! Well most of your content and image is original and informative. /many thanks for sharing this, cheers.