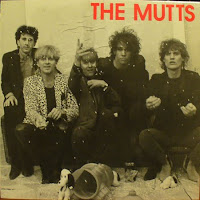 Earlier this month I shared an LP from a long-defunct L.A. band called The Mutts.  That full length, Stinko's Ranch was preceded by this six-song ep, some six years earlier.  If you cared at all for the aforementioned disk, you'll likely want this. At this stage in their career (a poorly documented one unfortunately) The Mutts hadn't quite absorbed enough Replacements yet for Paul Westerberg & Co. to be a prevalent influence, but a panache for muscular power-pop had nonetheless permeated the quintet's collective DNA.  "Boys of One Side (Girls on the Other Side)" gleams with shades of Tommy Keane, and while the remainder of the ep doesn't necessarily follow suit, it's fairly compelling (though if they had nixed the ghoulish, rockabilly-inflected "Just Another Halloween," this platter would've been just as effective, perhaps even more so).  Kick out this jam.

Ah, the Mutts. Cockeyed Ghost played a few shows with them at the end of their careers. Their parties were legendary. A fine band.

Very cool share! I have the vinyl, but no working turntable. Thank you!!!
Stevo In Yr Stereo od Nightmare City Halloween
http://nch01.fortunecity.com/

Saw these guys play outdoors at the Los Angeles Street Scene festival in '86 or thereabouts - I was a young teen and so happy just to be seeing LIVE LOCAL ACTION. These guys lived up to that, and more. This EP will forever haunt my memories . . .

That's me 2nd from right on guitar
Great times

would you please re-up this one?