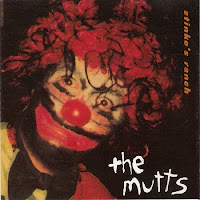 Here's a sparkling lil' gem I became acquainted with just a few months ago, despite it having been floating around for a good eighteen years.  A presumably L.A. based quartet (pared-down on this album from a five piece on their debut ep) The Mutts had a rock solid penchant for muscular, if not a tad but  goofy riff rock with sizable hooks, occasionally evoking Sire Records-era Replacements and the Doughboys.  Stinko's Ranch is damn consistent, not to mention damn good, boasting such exemplary offerings like "John Hughes Movie (Not Quite Like A)," "Cricket," and "Funnest Girl." Look for a rip of that aforementioned Mutts ep in the not-too-distant future.

Thanks for this. I listened to it today and really dug it. I'm amazed I'd never heard it (or OF it) before, but your "Sire-era Replacements" assessment drew me in. Really great stuff, from an era where a lot of cool bands slipped through the cracks.

I agree with you on all fronts Eric.

thanks for this.been lookin for this a long time since hearin 'wants to belong' a few years ago.I'll look forward to the ep.anybody who likes these guys ashould check out the related band the POPRAVINAS

would you please re-up this one?