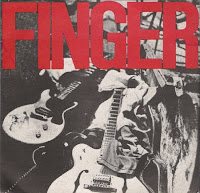 In the annals of North Carolina indie rock histroy, circa the 1990s, much has been discussed about such Tar Heel luminaries as Superchunk, Polvo, Archers of Loaf, and for that matter Ben Folds Five, yet one of the states finest exports from Raleigh, Finger, rarely materialize in the conversation.  Hopefully this worthy, but perhaps none-too-urgent matter is about to be rectified with the release of a Finger anthology cd, Still in Boxes, issued this spring on Second Motion Records.  A crackling quartet that fit in with just about any of the aforementioned success stories, Finger's brand of punky, crunch-ridden guitar rawk offered an earnestness their hipster contemporaries couldn't hold a candle to.  Furthermore, Finger genuinely sounded like they were a product of the south, due largely in part to a noticeable dialect and a smidgen of twang that put them more in league with say, Snatches of Pink.  To cut to the long and short of it all, between 1990-94, a self-titled album, a clutch of singles and compilation appearances (one documented on these very pages) were unleashed to an indifferent public, save for local aficionados. 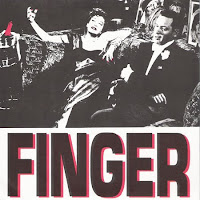 While the a-sides to these three 45s make an appearance on Still in Boxes, the b-sides (including a snarling Dead Boys cover) do not. Once again, Wilfully Obscure comes to the rescue.  To the uninitiated, let these seven tracks serve as an introduction to Finger, and moreover an incentive to investigate some of the band's equally, if not more potent material on their new retrospective album.  BTW, guitarist/windpipe Brad Rice has since gone on to record and/or tour with The Accelerators, Backsliders, Ryan Adams, Tift Merritt, Son Volt, and more currently Keith Urban.  For further info on Finger, head over to We're an American Blog for a nice write-up. 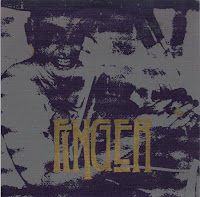 You forgot to mention John Howie, lead singer/drummer for Finger, who went on to front Two Dollar Pistols-- a pretty good alt/country band on Yep Roc.

Thanks Brushback. I'm not familiar with Two Dollar Pistol, so I suppose you did the mentioning for me. I like his voice on the Finger songs. so I'll def have to check them out.

I don't think Two Dollar Pistols are active anymore, but I've got a couple of their CDs (from the early/mid '00s) and I like them a lot. Really good songwriting.

The Two Dollar pistols are pretty much defunct, but John Howie Jr. has a number of musical projects currently, the main one is The Rosewood Bluff.

You wouldn't happen to have another B-side of theirs called "Doug Fieger's Blues" would you?

Sorry, don't have that one.

Oh well, serves me right for being old and without a turntable. Thanks for this!

I really appreciate this post. Had the original Finger s/t CD and the "Fish Hips and Turkey Lips" comp for years, and recently bought the Still in Boxes collection. Had no idea a couple of these tracks existed. By the way, John Howie was the drummer for Snatches of Pink as of their last album release.

I'm a little late to the party, but thought I'd chime in and mention that Finger covered Gram Parsons' "Still Feeling Blue" for a 1993 comp called *Conmemorativo* that also featured Bob Mould, Victoria Williams, Uncle Tupelo, and The Mekons.

Also, Finger should not be confused with THE Finger, a punk rock band that Ryan Adams was part of.

Hello,
can you please repost this singles compilation?
Thank you very much
Stathis