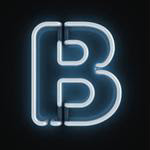 I'm well overdue for the next installment of a little series of self-curated compilations that I began posting in 2010.  Adhering to the same theme as my preceding "H" "O" "P" and "G" folder mixes, this robust, thirty song collection of totally random artists have only one thing in common - the first letter of their respective monikers.  In fact, no consideration has been given to genre.  For almost every complete album I have by an artist on my hard drive, I store just as many random one-off songs by artists I don't have a dedicated folder to.  These random one-offs have been corralled into "letter folders" A through Z.  As was the case with the previous entries I'm not going to publish the track list, but I will give away a few spoilers - plenty in fact.

So far, these mixes have been heavy on covers, and The B-job is no exception with Beezus taking on a Superchunk anthem, Bigger Lover's giving a Nick Lowe classic another lease on life, and Big Drill Car contribute an unreleased Beatles remake!  The late Bill Hicks rips into Rush Limbaugh, Barry White get's his truckers mouth on in a hilarious montage of bloopers, and coach Bobby Knight looses his, um, shite.  There's demos from Bishop Allen, BC Camplight, and crazy cool enough, Blue Cheer.  The pre-Turning Curious B-Lovers are accounted for with a Teen Line-worthy classic single side, as are the Bandables, checking in with an immaculate nugget of vintage power pop gold.  You also get a super rare Bailter Space comp track, my favorite Barbara Manning song, and live Bongos.  Last but not least, the Bum Bar Bastards (of Tube Bar fame) will introduce you to Judy, a startlingly crass New Jersey barkeep, whose adamant suggestions of maternal copulation will tickle even the most jaded of crank call naysayers.

It would be kind of foolish for someone like me not to check out something like this.

Will check in later with ultimate assessment of foolishness.

Thank YOU for another great year.

It's really a fun little mix, and the "spoken word" stuff keeps things especially interesting. Let me know what you think.