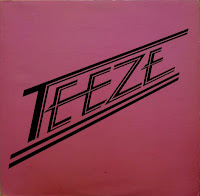 In light of today's events dedicating more ones and zeros to discussing and disseminating cool music feels a little frivolous, but perhaps this can be the diversion some of us need.  Moreover, I intend to keep my word of "gifting" you nightly for the remainder of the holiday.  Of all the Chanukah weeks blessings I've offered this week, Teeze are undoubtedly the biggest unknown quantity.  In fact, the only place where this band/record is mentioned at all these days is on Ebay, where the disc in question sometimes fetches north of $100.  Described as punk, power-pop, and glam metal (often within the same breath) Teeze were a trio of L.A. denizens, who like thousands of others were gunning for a record contract, and my understanding is that this record was specifically designed to serve as their demo.  Though it should have been sequenced as the lead-off track, the undeniable highlight of Teeze, "Assembly Line," was relegated to caboose status.  Clocking in at a mere 105 seconds, "Assembly Line" is a shattering, spiteful, rip-roaring spiel on blue-collar monotony that subscribes to the ethos of the first two Dickies albums albeit with even more fervor and smash and grab intensity.  Truly one of the finest songs ever of its era, and perhaps for the ages, holding up to anything the Germs and Zero Boys committed to tape.  Other portions of the ep are radically disparate by comparison, not to mention immensely tamer (hear the remarkably AOR-friendly "No Kind of Reason").  "Death Threat" and "The Mess That You Made" fall somewhere in the middle, but again, nothing satisfies on these grooves nearly as much as "Assembly Line."  In fact, Teeze's second-best effort, "Stephane" isn't even included on this record, rather it arrived on a local 1981 comp, Futurerock.  Of course, I'm supplementing that song alongside the five ep cuts.  Another ep's worth of Teeze tunes (from 1984) are available here.  And by the way, frontman Joey Carducci isn't the same guy affiliated with SST Records.

01. Death Threat
02. The Mess You Made
03. No Kind of Reason
04. Close to Love
05. Assembly Line
plus Stephane (from Futurerock compilation)

any chance of a re-up? Thanx for your blog. I come across some good stuff

awesome, thanks so much!!!

Joey Carducci, Glenn Bassett and Gary Falasco. The band was based in Rowland Heights, CA.

Lol.. I shot some photos of them in my studio. If you would like a print of Teeze, go search "Teeze" on GoFundMe or click here: gofundme.com/help-preserve-music-history.