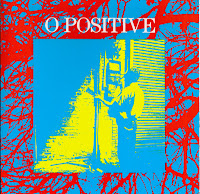 This handy compact disc compiles the first two ep releases of Boston's O Positive, a collegiate indie-pop troupe who signed their souls to a major label in 1990.  That big label effort, toyboatToyBoatTOYBOAT on Sony Records stiffed and you can probably guess what ensued from there.  The preceding ep's, 1985's Only Breathing, and Cloud Factory which arrived two years later, lent a semblance of artistic cred to O Positive, whose muse vaguely pointed towards REM and left-of-the-dial power pop (without much emphasis on the "power" quotient).  The problem with this two-fer reissue?  The tracks from both records are inexplicably intermingled, with a cover of the Left Banke's "Walk Away Renee" tossed in towards the end.  I ripped this in the same sequence as the CD, but below are the actual tracklists of the original records, along with some commentary from your friends and mine, Trouser Press.

Cloud Factory (1987, Link)
Talk About Love/Tied/Not Enough/In the Light/Watch Out, This Sled's Made For A Maniac

Only Breathing is a promising debut. Drummer Alex Lob and bassist David Ingham unite to form a monstrously strong rhythmic backbone, upon which guitarist/singer Dave Herlihy drapes his clumsy but earnest lyrics about self-preservation in the face of obsession and unrequited love. Although this is thematic terrain which has been crossed a million times, Herlihy displays an Andy Partridge-like penchant for clever wordplay, some of which works nicely.

Released two years later, Cloud Factory is a horrible sophomore effort. Murky sound negates the rhythm section; Herlihy's lyrics and delivery are also gutterballs, an apparent attempt to emulate Michael "This doesn't make much sense but it sure does sound intellectual" Stipe stylings. Add in a shameful over-dependence on guitar effects, and this is one bad record. (Perhaps for comparison purposes, one CD combines include Only Breathing and Cloud Factory, with "Walk Away Renee" as a bonus.)

Nice to see these guys get a little love. The "Toyboat" album is an old favorite.

The Trouser Press Record Guide (2nd edition, I believe) was my guide to finding good indie rock in the used music stores (remember, folks, this was pre-Internet), just as Christgau's 70s album guide had pointed me toward some now forgotten releases or bands that had faded from attention (or never had it in the first place!).

Any chance please of re-upping this seriously rare piece of music? Maybe a diff host, thanks.

We used to see O Positive out a lot in the early '90 in Boston. Memorably, it was the time I saw them was the last time I visited The Rat, in Kenmore Square. Since bulldozed for the fancy Commonwealth Hotel. I recall Dave Herlihy singing into a telephone on stage that night (apparently a re-occurring theme.)

A great band,their shows were always fun and full of energy. The disc is a great slice of the late 80's/early 90's. They have a website so check em out.

Perhaps this is a good candidate for a re-up

I loved these EP's and have been looking for them for a while. Any chance you could re-up them? Thanks.

Can anyone out there solve the riddle of O Positive's song Up,Up,Up? It is a beautiful song...but I wish I knew it's true meaning.