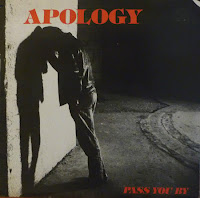 Just FYI, I'm in a random mood this week, but I have to start somewhere, so I'm starting with this.  I had some big time trepidation going into this record, not just because I had zero familiarity with Apology, but equally due to the pics I saw adorning the back cover - individual photos of all five band members, three of whom had hair exceeding past their shoulders, and another fella who was halfway down the home stretch.  Fortunately, at the bottom of the album jacket were two very redeeming recording credits - Vic Bondi and Lou Giordano, producer and engineer respectively.  That was enough to lure me in, and before Pass You By hit the turntable, I also noticed the lyric sheet included kudos to the Doughboys, All, Die Kreuzen, and the Goo Goo Dolls, not to mention several hardcore hopefuls from the same era.  Thank my lucky stars that this Cambridge, MA quintet were not a pitiful heavy metal or generic h/c troupe.  Then again, Apology weren't particularly mindblowing in their own right, opting for pedestrian leaning punk with relatively melodic overtones, bringing to mind Field Day-era Dag Nasty, Soul Asylum, and what 7 Seconds were up to contemporary to this record.   In a nutshell, Pass You By is fun, just not particularly visionary.  We Will Bury You blog has a nice write-up on this one from a few years back.

Thanks for the memories! Pass you by was always sort of a AOF ripoff. Just listen to AOF's IN THIS LIFE album and you'll get the idea...

Yeah, this is one of Mike Gitter's bands (I think one of the other bands was called Grin).

Had a feeling you'd be commenting Brush. Ever see them live?

Article of Faith were much better.

Never actually listened to them, nor did I ever see them live (though I'm sure Al Quint was saddled with it a few times). I could be way off, plus Mike doesn't need me supporting him, but I always had the sense that Mike used his scene status in order to build a band around himself and then follow whatever was the musical flavor-of-the-month at the time.

Can't beat the Articles of Faith "Give Thanks" LP, that's a really tough one to top.

I remember buying this just because it was on Wishingwell, but have never been able to find a rip of it until now. Thanks for the post!