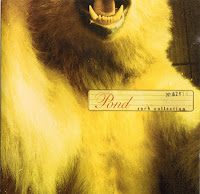 Pond's first album (self titled on Sub Pop) was a slow grower for me, but after witnessing a killer live performance in 1993, I was nothing short of enamored with them and eventually their record, which at this stage in the game I regard as nothing less than astonishing, and one of the single best debuts of the '90s.  Tight, kinetic guitar rock with a barbed wire exterior cloaking a sickeningly sweet harmonic core.  That little summation hardly does Pond justice, but it's a start.  IMO, their most crucial asset was Charlie Campbell, whose distinctive fretwork was about as fluid and agile as it came.  However, since the Portland, OR trio wasn't quite sludgy enough for the grunge set, they only managed to cast their net so far.

In about two years time, they pitched a curve ball with the insular, idiosyncratic, and often alienating The Practice of Joy Before Death, a record that hardly played to any of their former strengths.  Creatively, they redeemed themselves on their third and final go around, Rock Collection, which ironically was delivered courtesy of Sony Records, well after Pond's meager industry buzz had quelled.  I regard R/C as a cornucopia of everything Pond had meddled with before, good and otherwise.  Near-perfect dispatches "Flawed" and "Golden" are plenty spry and hooky, but it's only on comparative 'throwbacks,' like "Filterless" that they revisit their trademark rhythmic scheme, which colored so much of their intoxicating early endeavors.  Several other selections, mostly residing on Collection's first half, are nearly as admirable, but a handful of half-baked song-things gum up the works throughout, leading me to believe this disk would have been stronger had it been whittled down to a more concise ten or eleven tracks.  At any rate, you can judge for yourself, and I would further recommend that you treat yourself to Pond's first album if you haven't already.  Oh yeah, don't forget their Moth single (featuring their best b-side), which I'm also hosting.

Also, I just bought the s/t cd at the thrift store for $0.87 - what a weird coincidence.

Listen to a podcast review of Pond's Rock Collection on the Dig Me Out Podcast at digmeoutpodcast.com, a weekly podcast dedicated to revisiting lost, forgotten and overlooked rock of the 1990s.

I like all three Pond albums, but my favorite by far is the second one. If you haven't listened to it in a while, give it a try, and listen to tracks 6 through 11 ("Ol' Bluehair" through "Carpenter Ant"). I think the best songs are through the middle, which is not the usual arrangement, to say the least.

Any chance of a re-up on this?

What's up with this Exhibit A album? I found it on Spotify as an album by these guys.

Is there any possibility to get this on vinyl?