Aztec Camera - Digging Through Those Dustbins 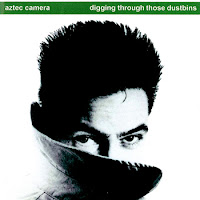 This is a fan-curated Aztec Camera bootleg of sorts, with the emphasis placed on Roddy Frame's pre-High Land Hard Rain recordings, consisting mostly of demos and early singles.  Unfortunately, I wasn't the fan in question who organized this little compendium, and as such I don't have source info.  However, the first half of these tracks (save for the live version of "Lost Outside the Tunnel") strike me as home-recorded fare, yielding a handful of tunes that I don't believe carried over in any form to proper A/C records or singles.  A veritable treasure trove in itself.  A bit further in, Dustbin sweeps up the Postcard Record singles "Just Like Gold" and "Mattress of Wire" before delving into remixes of a considerably more famous single (which you'll have to download to reveal the title if you aren't able to figure it out on your own).  From there we're treated to raw, acoustic takes of "The Bugle Sounds Again" and "Down the Dip," that practically upstage the album versions.  Things wind down with a pair of Rock Over London interview segments, and a live reading of the Clash's "Garageland."  With the recent Aztec Camera reissues on Edsel, it's unfortunate that virtually nothing from this boot was appended to the bonus tracks portion of High Land..., but that leaves more for us I suppose.

Awesome. I found the "Aztec Camera" 10 inch with the cover of Van Halen's "Jump" on it at the thrift store for 25¢. I was about 13 and it really blew my mind. I had just gotten into The Cure didn't know much about the Scottish scene. Thanks for these rarities man, you've really turned me on to some awesome shit I missed the first time around.

wow, man, what a great start!

Thanks for this find! I've been going through an Aztec Camera nostalgia kick, what with the CD reissues, and these add considerable depth.

If you are any bit of a fan of Roddy and Aztec Camera, then you want this.

Thanks for your comments folks. Your gratitude is truly gratifying.

Angelo gives us The Advent Wall Of Sound and spavid gives us The Eight Nights of Chanukah. Great December treats!Thanks.
@Mason ... The Aztec Camera cover of 'Jump' with the bonked out guitar ending is classic.
Happy Chanukah!

Greetings from Scotland. I had a cassette tape of about half a dozen of these tracks back in 1984(called "Green Jacket Grey"). The much treasured tape was eaten by the carcassette in my first Ford Escort back in 1988. I have searched for a replacent for many years. I shall treasure these along with my much loved first two AC Postcard singles. These are from a magic time in my life. Thank you, thank you, thank you...

This is so brilliant - used to have a great tape of a bootleg from a gig at Devilles in Manchester from 1981 when Roddy Frame was just 15 but I can't find it anywhere on the net. Gutted coz is was so great. Fantastic to hear Just Like gold after 20 years Thanks very much

This is so brilliant - used to have a great tape of a bootleg from a gig at Devilles in Manchester from 1981 when Roddy Frame was just 15 but I can't find it anywhere on the net. Gutted coz is was so great. Fantastic to hear Just Like gold after 20 years Thanks very much

Hello, was wondering if it were at all possible for you to reup this one...it looks great! Thanks...

Wonderful - thank you very much!

This link is dead. Any chance you could update it again!??