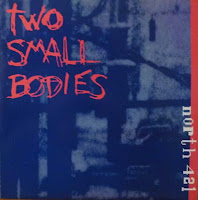 By the time they got around to wrapping up North 421 Two Small Bodies actually consisted of four bodies, and fairly normal sized ones at that.  Prior to that they were a trio, but I digress.  These scruffy Lexington, KY denizens had their musical compass pointing due north, specifically to Minneapolis from the sound of things, with frontman Chris Casey often intoning Dave Pirner.  As an entity, TSB definitely had a Soul Asylum-esque gleam to 'em, though In the Horse They Road In On was more their speed than Made to Be Broken.  That being said, their charisma angle wasn't quite up to snuff with Pirner and Co., but that's okay considering TSB were capable of pumping out rugged, commendable indie rock in their own right.  I'm in the process of obtaining the band's previous album Twelve Not Seven, which may be the subject of a future entry.