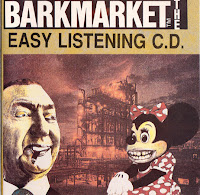 Barkmarket had an ungodly amount of competition in the early 90s, with healthy servings of indie, grunge, metal, punk and shoegazer taking up more than enough space on my teaming dinner tray.  Nonetheless, when I caught wind of them via their video for "Grinder" (off 1990s Vegas Throat) I gladly made room for dessert.  The brainchild of one Dave Sardy, this NYC conglomerate unfurled an unholy racket of noisome, avant-laced guitar rock, that at their most accessible might occupy the same airspace as Jane's Addiction or Mr. Bungle.  Highest marks go to their two schizoid masterstrokes, the aforementioned Vegas Throat and Gimmick, which followed in 1993.  In spite of all the startling juxtapositions, Sardy's exaggerated, carney-esque vox, and sonic frivolities galore, Barkmarket songs typically boasted an addictive groove, that really made the band's schtick worth the time any given listener would need to invest for full appreciation.  As for the album featured here, 1989's Easy Listening, Sardy and Co. were still perfecting that 'groove thang,' so to speak, and frankly some of the more adventurous, kitchen sink cacophonies ensconced within may ring a little too audacious for refined musical palettes.  The title of this post is culled from a lyric in "Buy America" (track four) which doesn't pertain entirely to Christmas, but speaks to the disposable inclinations of fickle American consumers.  When you think about it, isn't that what this holiday is all about?

Barkmarket disbanded in 1997, and Sardy went out to far more lucrative endeavors as a producer for Red Hot Chili Peppers, Gorillaz, Oasis, Spoon and a heck of a lot others.  All of the band's (Def) American releases are available physically and digitally via Amazon, Emusic and iTunes.