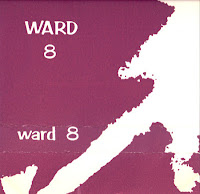 I received this cassette in a large lot of demos and the like earlier this year.  The sleeve is credited to Ward 8, as is the first side of the tape, with the opposite labeled Winter Hours.  It didn't take much searching to determine that Ward 8 was a precursor to Winter Hours, a New Jersey folk/alt rock five-piece who seemed to accrue endless critical praise in the 1980s.  The three songs occupying the Ward 8 side appear to be exclusive to this homemade release, with none of them carrying over to the spate of eventual Winter Hours recordings.  Like many indie hopefuls of the era, these folks fixed their gaze on Athens, GA after being flabbergasted by Chronic Town and Murmur.  When Ward 8 gave way to Winter Hours, so did much of that pervasive R.E.M. influence.  The four W/H songs represented here (tracks 4-7) found their way onto the first two ep's the band cut for Link Records, which I regard to be the best foot they put forward.  The Hours rendition of "All Along the Watchtower" is transformed into something more placid and sublime than Hendrix or Dylan could've likely imagined.

As a bonus, I'm also including a revealing 1984 demo version of Winter Hour's signature song, "Hyacinth Girl."  A fairly thorough bio is available on the band's Myspace Page.

And the gifts just keep on coming. I recall spending some time on the Interwebs looking for a supposed Ward 8 tape. No luck, although I was able to locate a "Hyacinth Girl" early version (I'll let you know if this one is different.)

When "Hyacinth Girl" hit the airwaves in Boston it was a magical song (maybe because it was a magical time in my life), and it seemed like the song would make them national stars. That didn't quite happen.

I never saw them live which is too bad because their guitarist could really rip it up on record.

Those first three songs are our first studio recordings as Ward 8. The drummer is Stanley Demeski who would later go on to join the Feelies and Luna respectively and in between would join Winter Hours while we were in between drummers. Stan is also the drummer on "Walk Away", "Incendiary" and "I Want" all of which were recorded in '83 when we were still Ward 8, and that goes for the original version of "Hyacinth Girl" which we recorded in March of '84, Stan left shortly thereafter. Bob Perry and I have been working on getting all of our Link Records recordings re-issued with unreleased bonus tracks. We're getting closer to making that happen. Thank you for your kind comments.

Would love to hear this again! It's been a long time. Came up recently in an unlikely ebay search. Sad to hear the guitar player just passed recently. Many thanks for the possible re-up in any case...

Hi Spavid,
Please could you reupload this post?
Thank you,
buckeye

Could you please re-up this one?