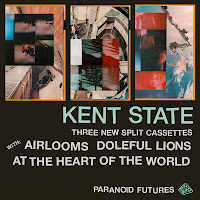 Although there were some genuinely prescient folks among us to foretell the reemergence of vinyl as the music format of choice (for audiophiles anyway), virtually no one spoke even in jest about tapes coming back on the market.  And for good reason I suppose, with the fidelity of those antiquated, mini-reel-to-reels being inferior to records and CDs...but nostalgia and novelty have a funny way of creeping back into our lives.  No, you won't find cassettes, either blank or pre-recorded, vying for space next to spindles of CD-Rs at your favorite big box store, but they've very quietly materialized in extremely limited runs via a handful of indie imprints.  Once the antitheses of said audiophiles, current titles on tape are if anything coveted by that very niche, thanks in part to taste-making labels like Burger Records, but I digress.  Kent State, a Baltimore crew I introduced you to last summer, have flicked their collective Dolby switches to "ON" and recently issued no less than three separate cassettes, all under the banner of Past Lives, splitting the difference with one of three unrelated contemporaries: Doleful Lions, Airlooms, and At the Heart of the World, on each cartridge.  All tapes feature one side of three new Kent State songs, with the opposites bearing two to three cuts from the aforementioned.  Artwork and cassette shell color are also exclusive to each and are really something to behold.  As for the music...

Kent State aren't indie rock's "great white hope," so much as it's great white noise.  Their allotment of songs on Past Lives are doubly raw, raucous, and sprawling than those appearing on the Walk Through Walls ep. With a din-addled roar that frequently out-bludgeons Sonic Youth, even KS' smothered harmonies fall prey to a certain amount of dissonance of their own.  A very heady brew that goes well with the likes of Cloud Nothings and Male Bonding.  And what of the other three combos?  I've been touting the virtues of Doleful Lions surreal, yet often poignantly sun-kissed verses for what feels like an eternity now.  A deep, pithy catalog have they, but if you're just looking for a taste, their two selections here are as gratifying a place to dive in as anywhere.  Airlooms were an unknown quantity until I encountered them here sharing a side with Kent State.  Soaring melodicism and unruly squalls of feedback reign in glorious abundance with these blokes on the case.  Vaguely akin to Chamberlain or Kings of Leon, that is if those groups had the creative gumption to record in the pit of the Grand Canyon, if not a 747 hangar.  You can get a whiff of more of their goosebump-inducing tuneage from their Bandcamp page linked above.  Regarding At the Heart of the World, you might say I don't have a place in my "heart" for shronk and screaming.

Getting back to the main event, I would encourage you to explore the remainder of Kent State's growing body of work, which can all be had at Bandcamp, and is also where you can make a wise investment and purchase this limited three-tape set.
Posted by spavid at 3:06 PM