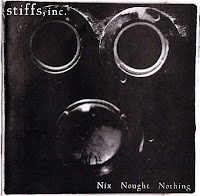 I had a request for this recently, but it's a wonder I didn't share this one eons ago on my own volition.  Maybe I was under the fall impression that Nix, Naught, Nothing was still commercially available.  Anyway, New York's Stiffs, Inc were met with mainstream indifference upon the 1995 release of this disk, an era I might add when ersatz punks like the Offspring were reeking up the charts in platinum fashion.  Slavishly anglophile, the Stiffs plundered copiously from the Buzzcocks, but the quartet cloaked themselves in dusty, Victorian-era garb with a period mindset that cropped up intermittently in their songs.  Surprisingly sophisticated, not to mention uniquely esoteric for a debut, Nix... won me over in spades, thanks to the incredible acumen of it's architects.  While this LP turned out to be one of the most profoundly crucial secrets in '90s, sub rosa rock and roll, the independently released follow-up, Electric Chair Theater Presents could barely hold a candle to it.  A brief bio can be found here.  Perhaps some early Stiffs, Inc singles and some other surprises will follow.  In fact, I have one for you already, a split 45 they shared with Jonathan Fire*eater that I posted all the way back in 2009.

I should listen to this again. At the time I remember being disappointed that the rest of the album wasn't as good as "Chelsea".

Yeah, I thought this band was going to be a lot better when I first started listening to them. I guess they ended up being really 'goth', too.

Some of the stuff that was being touted as 'retro punk' back in the '90s didn't turn out to be so great.

Link has been fixed

Can you re-up this album? Thanks in advance...