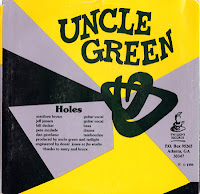 I liked Uncle Green's 15 Dryden album, which I shared a couple years back, but I love this single.  "Holes" is chime-pop bliss, and typifies the '80s "new south" sound.  That ace tune is backed up with the chilled-out "Heaven."  Although I wasn't huge on Uncle Green's later material, their first recorded forays did a lot for me.  By the mid-90s, UG had mutated into the measurably more successful 3 lb. Thrill, who from what I understand held a successful Kickstarter campaign recently to complete an album, Rycopa, that should have seen the light of day in 1997.  It's a 32 song double CD available from CD Baby.

A. Holes
B. Heaven

I'm so happy to be able to hear Uncle Green I've never heard before!