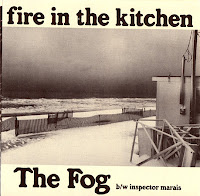 This is a long overdue follow-up to an entry I penned all the way back in 2008 for Fire in the Kitchen's outstanding Theory of Everything album.  Can't believe it's been that long, but anyway...  Bearing an occasionally downer modus operandi, this New York quartet's pensive strain of post-punk thankfully fell well short of the "despondent" threshold.  With slight melodies, warm playing and assured delivery, I'm almost at a loss for words when it comes to describing the visceral charge so many of Fire in the Kitchen's songs arouse.  Almost like a more subtle variation on what Mission of Burma were emanating a decade earlier, but still, that doesn't quite distill FITK's engaging formula, one that lends an almost timeless persuasion to the riff-savvy "Simple English," the decidedly more contemplative "The Middle Fears," and last but not least, "The Fog," a bittersweet but surefire charmer that slots somewhere in between those first two.  I thoroughly love what these guys were going for.  Source info for the songs are as follows: 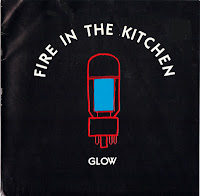 Thank you so much for this post. I commented on a recent post of yours about how much I had liked this band and your mentioning them recently caused me to listen to the LP again. Yeah, I had these singles, but having them as a mp3s is great. This stuff is why I will get that turntable convertion unit.

any chance that you have thrillsville cd?

No. I want a copy of Thrillsville too.

if you're still looking... here's thrillsville in 320kbps: http://www.mediafire.com/?vdrvh1qhnq1r7oe
feel free to share it in your blog! cheers!

Great entry! I came across "Glow" in my 7" collection and was scouring the internet for more info on the band (there is hardly any, and I thought it fitting that the only other write-up I could find was on a blog called Wilfully Obscure).

Any chance that this, as well as Theory of Everything, could be re-uploaded?