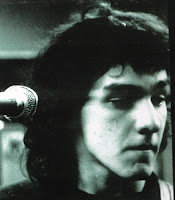 Sometime later tonight, at a small nightclub on Queen St. W. in Toronto, CA, a band masquerading as Montreal's legendary Nils will be be taking to the stage.  I stress the "masquerading" quotient of that last sentence for a reason that I'm sure won't be lost on a good 99% of the attendees - lead singer, guitarist, and overall life-force Alex Soria passed away in 2004, some ten years after the Nils dissolved in the mid-90s.  In fact, the reconstituted Nils (veritably a tribute band at this point) feature only one original member, Alex's brother Carlos.  By the tone of this diatribe, I think you can see where I'm headed.  It's one thing for a band with a heavily altered lineup to retain their original name so long as the nucleus is still intact, but that's hardly the case here.  Perhaps this situation would be more palatable to yours truly if they were touting themselves as "Carlos Soria's Nils," following in such Jurassic footprints as "Joey Molland's Badfinger" or "John Kay and Steppenwolf."  Nonetheless, I had "nil" say in their decision, and while the music performed this evening might actually be quite satisfactory, the billing is still disingenuous enough to ruffle my feathers.

And what of the legacy of the late Alex Soria?  Well, in 2010 we were treated to an albums worth of unreleased Nils recordings (bundled with a live DVD) in the form of The Title is the Secret Song, also available in a slightly different configuration on vinyl.  A few years prior to that, a posthumous DIY cd release of unreleased Alex solo songs, Next of Kin, was made available, though exceedingly tricky to locate.  Several years before the ersatz version of The Nils launched, a friend tipped me off on a tribute show to Alex that was held on March, 11, 2005 at Montreal's Main Hall, approximately three months after his tragic and untimely death.  For practical reasons, making that gig wasn't an option.  Luckily I've been keeping a cd-r of that musical homage in my back pocket almost as long as Wilfully Obscure has been running, and tonight seemed like a fitting time to share it with the world at large.

In addition to Carlos Soria's inevitable involvement with the tribute show, several of the Nils peers, past and present offered significant contributions that evening, the highlight being a reshuffled lineup of the band fronted by John Kastner of Doughboys/Asexuals renown.  To my knowledge this was a one-off gig with Kastner, wherein such Nils touchstones as "Daylght," "River of Sadness," and "Call of the Wild" were preformed, brilliantly I might add.  Two of Alex's little known post-Nils outfits, Chino and Los Patos appropriately shared the bill, albeit without their captain at the helm.  Carlos takes the mic for "I Am the Wolf," a vintage nugget from the Nils' Paisley ep.  Earlier that evening Jim Bryson, Chris Page, and Ian Blurton (Change of Heart, Blurtonia) played brief solo sets, often heavy with covers, not just of the band in the question, but some of Alex's favorites as well, including Neil Young and Husker Du.  All in all, this recording is a perfect memento of when the final chapter on the Nils should've been written.  I for one can do without the post-script.  The band's catalog, a self-titled 1987 LP, and the wonderful Green Fields in Daylight anthology are available digitally from iTunes, Amazon, and Emusic.  If you're new to the Nils, these two albums are the place to start.  A fairly comprehensive article on Alex's life can be read here.

Looking forward to this, thanks!

Wow. This is awesome.

I especially liked the version of "Don't Cry No Tears".

The Nils played my club (Call The Office) last night. It was pretty good. Some old songs, mostly more obscure ones and some new. Nobody misses Alex more than Carlos does, and this band is, in the truest sense of the word, a tribute. Carlos wrote those songs with Alex, and it's nice to see them being performed.
A new record is in the works as well.

Thanks for your comments. I don't have a problem with the band per se, I just think a slight modification needs to be made to their moniker. Glad to hear it was a good show.

Thanks for this. My Nils lp is one of my most prized possessions.

I saw "The Nils" in Toronto last week and really enjoyed hearing those songs live. I only discovered the Nils' records in the last year, and I was too young to ever see them play the first time around, so I'm grateful for that. I mean, I don't see the harm. A modification to the name is in order, and apparently they do prefer to go under the name "The Nils FC" (so says their website), but who knows how hard they try to enforce that...

Thanks a bunch for uploading this. Weird timing, I don't check this website too often, and I've been listening to "Next of Kin" and the Chino EP all week (bought them off iTunes after the gig). Can't wait to hear this...

Hey, thanks for posting this. I first saw the Nils in 1984 at a place called Station 10 near the Forum. Tiny place--to get to the bathroom you had to walk right by the band. They were there three nights in a row and after the first set on the Friday I was hooked. I saw them as many times as I could after that but thought they were the best as a three piece with Carlos on bass and Alex on guitar. IMHO they never got recorded all that well (par for the course back then); live they were a wave of energy, melody, and power that just flowed around you and sucked you in.

Just my two cents, but I'm really thrilled that these songs are not rusting someplace. Alex's songs stand up to the best of the best from that era and beyond. Certainly the best 'indie' band to ever come from Canada.

Thanks, you made my day.

Hey - very late but just saw this. Huge Nils fan, any chance of a reup?