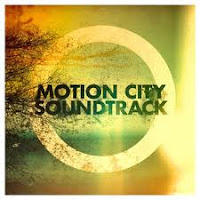 For me, a new Motion City Soundtrack album isn't just a collection of new songs from Minneapolis' "fab-five," it's a veritable revelation.  An every-other-year revelation to replenish my hungry mind with a fresh cache of wit, vicarious (yet strangely relatable) scenarios, and an unremitting cavalcade of vocal and synthesizer hooks, all of which I'll etch into my cranium and call upon at-will in perpetuity.  Virtually all of that credit falls to the razor sharp tip of Motion City's spear, Justin Pierre who over the course of five albums has proven himself to be a singular talent and wordsmith, a strikingly rare talent in this century.

With that out of the way, Go isn't your usual MCS record, not by a longshot.  Just as their high-strung fourth album, 2010's My Dinosaur Life struck me as the appropriate follow-up to their second, Commit This to Memory from 2005, the carefully measured and streamlined Go pans out like the far more logical successor to the band's third disk, Even if it Kills Me.  Confused?  I thought so - that is unless you have a thorough handle on Motion City's back catalog.  In a nutshell, it was on 2007's Ric Ocasek-produced Even if it Kills Me that Pierre and Co. knocked the hyper quotient down a few notches in favor of an ever so gradual evolution (translation: maturity).  Go is doubly more tempered, at least in execution, discernibly evidenced by Jesse Johnson's once wonky Moog, tamped down to a mere murmur on the majority of this outing, not to mention a noticeable de-emphasis on MCS' typical power chord freakouts.

I'm almost tempted to pin the "back to basics" tag to the overarching tenor of this record, but Motion City's early endeavors were startlingly complex, not to mention deliriously wired, when stacked up against the lucid hue of Go, which by the way features a bevy of ballads.  Perhaps the most prominent among them, "Timelines," is a personal narrative by Pierre, peppered with the kind of self-deprecation we've come to expect.  It's fittingly followed by "Everyone Will Die," an uncharacteristically resigned rumination on mortality that kicks all cynicism to the curb.  Certainly not "Imagine," but with such a genteel tack in place, portions of Go are tantamount to a Justin Pierre solo record.  On top of that, we're even profanity-free this time around.  If it's unbridled ferocity you're craving, you're likely to be taken aback, but there are some neurotic saving graces in the guise of "Circuits and Wires," "The Worst Is Yet to Come," and the curious "Boxelder," all of which are comparatively vigorous.  I'm not sure what's to account for Go's kinder, gentler modus operandi, or even if MCS plan on excavating this vein any further, but luckily there's still plenty to savor here.  For the time being you can stream the entire album on Soundcloud, and but it here or on iTunes, who are offering a deluxe edition with three bonus tracks.
Posted by spavid at 9:12 PM

Hmm, not sure I agree completely this time Mr Spavid. You got me into MCS in the first place. I'd never heard of them before and the first four albums have become some of my most played over the last two and a half years. For that I'm truly grateful. I love the hilarious but moving turns of phrase that JP uses so often, making unlikely poetry from his bent perspective. I love the rush of power chords and keyboard in buzzy swells of hyperactivity on all those records. But a lot of the words on the new album seem a little trite to me, with obvious rhymes, or line filling syllables. Like scattered seeds of sycamore frinstance or I'm a son of a gun. Really? For a chorus? And the quieter tone seems a little monotonous to me now on my third listen. Maybe I'm being a cranky old man, but I was looking forward to this record with so much excitement and it's yet to move me much. We'll see with a few more listens.

When i listened to 'Go' for the first time, I was a little bit disappointed. The second time, it already sounded a lot better. It took me a few listens to really appreciate this album, but for now, it still gets better and better.

I hear you Mr., but really it's not that much of a departure is it? It's not like they've turned into the Goo Goo Dolls or anything.

You might be intersted in Justin's new-ish side project, Farerwell Continental: