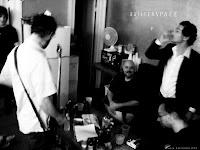 I hopped aboard the good ship Bailter Space just in time for their 1993 watershed platter, Robot World.  Criminally ignored, even for a band with ties to Flying Nun Records, that general indifference ultimately left more Bailter for their De minimus, yet firmly devoted fan base.  Starting life as The Gordons in Christchurch, New Zealand, they released two albums under that name, but by 1989 had reshuffled their lineup, and eventually became known as Bailter Space.  Under that oblique moniker seven albums resulted in roughly ten years: Tanker, Thermos, Robot World, Vortura, Wammo, Capsul, and Solar.3, alongside several short form releases including 1992's excellent Aim ep.  Responsible for some of the finest noise-pop/rock of '90s, Bailter Space's amped-out swath wasn't necessarily for the genteel or faint of heart, but for those who opted to make the investment (esp in Robot World and Vortura) they were accorded the potential of being ushered into a sonic threshold without peer.  iTunes and Amazon downloads have their back catalog all tied up, so the best I can offer you is a 1992 Peel Session, which as it turns out is quite representative of their distortion-ridden firepower.

Weird weird weird. The h in http isn't part of the link and when I copy and paste it, only the h shows up in the address bar.

Just repaired the link. Sorry about that.

such a really and truly godlike rock band. i wish i'd gotten to see them back when it counted, and of course feel the same way about the Gordons. what a mighty lineage.

Took a first date to see them play at the Lansdowne in Sydney in 1990. All the blood drained out of her face when the band started and the astonishing wall of noise pushed her out and into a cab. Never saw her again. Ah well.

As you note, a great and very underrated band. Why "Robot World" didn't catch on with the shoegazer crowd is beyond me. I wish I'd gotten to see them play during their existence.

Saw them at Lounge Ax in Chicago around the time of "The Aim," and I remember Steve Albini staring intently at them. A band you simply *had* to see live. Wow.

Glad to hear that some of you lot got to see them in a proper live club. Me? I caught an in-store at a local record shop, probably around 1995. Still pretty immense though.

Thanks for posting. Never heard this. I'm a massive Bailter Space fan who, like you, got into them just before Robot World came out – thanks to Melody Maker making both The Aim/We Know and Shine/The Unseen (they were released as split 7s in the UK on a singles club) 'singles of the week'.

I guess it was a case of right time/right place for me (was coming out of listening to lots of metal like Godflesh and Fudge Tunnel and early Grunge and was probably looking for more 'pop' sensibilities, having recently been introduced to Spacemen 3).

Loved the band ever since, but Robot World, for me, really encapsulates what they were all about. The enormous fuzzing warmth of tracks like Begin, Ore, Fascination, Make and Get Lost are seared into my being forever. They managed to balance quite delicate hooks amidst colossal soundscapes like no one else I ever heard.

Managed to see them four times, twice on the Vortura 'tour' (including their show at the short-lived Phoenix festival sharing the stage with Cop Shoot Cop and Shellac!), then just after Wammo, including a show at the crappy Harlow Square when we managed to turn up far too early (very stoned) and caught their soundcheck (fond memories of Alister blasting out those ENORMOUS chords while bent over his Marshall and Vox amps with a screwdriver tweaking the sounds). I was always watching Brent though, live, as he's such a powerful drummer, pounding the hell out of the kit with that bouncy 'Bailter Space beat' while also firing off samples (usually further layers of ENORMOUS guitar textures.). Somewhere I even have a cassette recording from the sound desk of one of a shows at The Garage (after Wammo I guess – pretty sure they play Glimmer Dot, but the set also included an amazing version of Fused).

I never fell for Vortura as hard as I did for RW as it seemed much darker and angrier, although Shadow is perhaps the best Robot World track not on Robot World! Loved the Who-meets-Stereolab vibe of Wammo though and completely flipped for Capsul when it came out (and for a good year or two subsequently). That's probably their most complete album and should have broken through for them.

Sorry for waffling, only listened again to Robot World this morning after a long time and it sounds better than ever.

If you'd like to hear that gig I'll try and digitise the recording. Let me know.

Any chance for a re-upload of this?