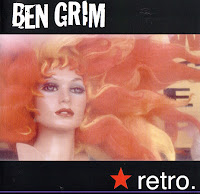 I thought this would be a fitting follow-up to my Songs for Snakes entry from yesterday.  Boss Tuneage Records in the UK has a thing for utterly arcane punk and "popcore" groups, often releasing retrospective CDs for defunct bands of their liking.  In 2003 they invested a few pounds into an underexposed Wisconsin-ite pop-punk act, Ben Grim, and minted the band's retro album, compiling recordings predominantly from 1996-98.  Ben Grim were more than just casual aficionados of the band ALL, and furthermore a bevy of ALL protege combos including Pollen, G-Whiz, Porcelain Boys, Bender, and to a lesser extent Big Drill Car and the Doughboys.  If any of those names beckon, chances are you know what you're in for.  Heaps of fun to say the least, and a good twenty-two doses of it at that.  Bassist/mouthpiece Peter Saturday would later surface in King Friday and Jennifer Echo.

2010 saw the re-release of this disk on the Japanese Waterslide label.  Tracks 1-14 comprisethe retro CD proper (with the last of those songs being a killer Zero Boys cover, with Rev. Norb of Boris the Sprinkler/MRR renown on guest vox).  There are an additional eight lo-fi demos, recorded post-1998 padding this affair out nicely.  A couple of the songs need title clarifications.  I'm on it like bug spray on bollweevils.

Originally checked these guys out because of their dreads and Mega City Four/ Doughboys t -shirts.
They made some decent pop punk. I think I still have the single with the Zero Boys cover around here somewhere. They played Baltimore years ago, but I missed the show. Thanks for the upload!

Can you re-up this one for me?

Sorry about the false start. It's updated now.

Thanks again. You have anything by the band G-WHIZ ?

Something is screwy with track 15 Our Painted Faces. Though it shows as being 2:34 long, playing it makes it fast forward (or run silent if you set it back) until the last 28 seconds or so. Is this how it is suppose to be? Odd phenomenon I have never experienced before.

News to me Snazzy. I'll try to duplicate what you're referring to and get back to you. My apologies.

re-up possibly? I seemed to have missed this first and second time around. :)

Holy smokes, this is fabulous! Sounds like something Dr. Strange would've put out in mid-90s. Thanks for re-upping!!!