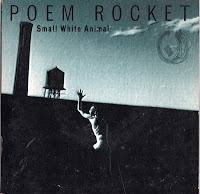 I had heard of Poem Rocket for the better part of two decades but was entirely unacquainted with their music until I found this single a few months ago at a price I couldn't refuse.  Not only was I fifteen years late arriving to the party, but by the sound of this single, Poem Rocket could have tracked these songs in 1980 and I wouldn't have flinched if that had been the actual copyright date.  Wow.  "Small White Animal" has a pulsing, vintage post-punk aesthetic down pat, brandishing an undercurrent of droney, squalling feedback that dovetails well with the song's enveloping density, sounding like an amalgam of early Killing Joke, Sonic Youth and Bailter Space.  This baby damn-near floored the hell out of me.  The less engulfing flip-side, "Milky White Entropy" strays into acoustic, navel-gazing territory, gradually panning out mid-song to a decidedly more howling sonic motif...and then back again.  Originating from New York City, and relocating sometime thereafter from what I'm told, Poem Rocket have a back catalog that I really need to explore, specifically from this era if nothing else.  You can take a peak at their official website, but it appears to be less than up to date.  A makeshift, dashboard-filmed video of "Small White Animal" is provided below.