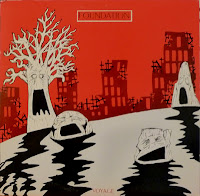 Once again, a compelling record sleeve had me running for my credit card.  The subjects in question this time called Reston, VA home, and happened to share the same record label (Fartblossom Enterprizes) with Dave Grohl's pre-Scream hardcore troupe Dain Bramage.  Now that's what I call trivial, but I digress.  On the back of the record sleeve, Foundation unabashedly tout themselves as "emo-core."  True...but not so true.  Keep in mind "emo" was technically a year old at the time this disk was minted.  D.C.'s Rites of Spring have long been crowned as the progenitors of this tricky genre, and Foundation were in class and taking notes.  Voyage's glorious and cathartic title track deliberately plunders the Rites' template, to gratifying effect.  Elsewhere on this platter, "Different Inside," and "Time Has Come" split the difference between Dag Nasty-tinged hardcore and the innovations that came to the fore via the capitol city's fabled "Revolution Summer" of 1985.  "We've Strayed" and "Halfway to 50" adhere to a more traditional punk bent, though I'm not sure what's to explain for the classical guitar intro, "Winter Vision."  Overall, not too bad for a debut.  Trouser Press had this to opine about Voyage:

Recorded as a quartet, the 23-minute Voyage mini-album includes "Winter Vision," an instrumental that treads dangerously close to a '70s wizards and warlocks sound, as well as some above-average rockers ("Halfway to 50," "It's Not as Bad") and the title track, a mixture of pop-punk and new wave cheesiness that is somewhat reminiscent of a certain Psychedelic Furs song. Foundation's bassist, lead guitarist and drummer each share lead vocal duties, sacrificing continuity but adding variety to a set of songs that might otherwise go stale.

What an artifact, man. This is the damned opposite of an outside world where fashionably obscure rare wax gets Pro-Tools'd into $35 LP servings and we all shake dicks like civilized bastards with a common, callow canon. It's appreciated, this work of yours.

It was Chris Leo who hipped me to Rites of Spring and Rev. Summer, more or less offering "get this or else" alternatives. In my own day "emo" meant Unwound and Fugazi (and the Van Pelt) and even heavier stuff than that, but I did have the pleasure of meeting the Rites' Mike Fellows and saying the same "thanks" he's heard from 1,671 whiteboy supplicants. I hope he digs it and doesn't bristle. [Fellows' solo record as mighty flashlight - on the hq of yet another iteration of "emo," Jade Tree - is really fucking weird-good. Like Randy Newman drunk on Pro Tools and dropping plates everywhere.]

All this is to work towards the guesstimate that, hell, emo really only lasted 1.5 decades before its descent into black nail polish. Like Quint says, "not a bad record for this vicinity."

Here, here Lex! You're a gentlemen and a scholar. Will have to check out that Mike Fellows platter. Cheers.

Third band I know of named Foundation, although these guys were apparently first. The other two fall under the hardcore umbrella too:

shit! beat me to the punch with this one. really like this album. really under appreciated dag/dc style. i believe the guitarist later played in los vampiros with peter cortner.

i just started my own blog and added you to my blogroll. it seems we have a lot of the same taste in pop punk and some other stuff.

The emo-core label was meant to be ironic, you guys. I offer as my bona fides the fact that I was the bass player on this record. I believe, and will always believe, that my friend Dave R. invented the term emo-core upon seeing Rites of Spring play their second or third show.

I'm pleased that you feel this record stands up over time. I'm also strangely pleased that my woeful high-school-notebook-"Pushead"-ripoff artwork drew you in as well. Sad to say, my artistic ability has not really improved much over the past 50 or 60 years or whatever.

Hey guys, Davis the drummer from Foundation (and later Slumberland record's Lorelei) here. The "File Under Emo-Core" blurb on the back of the Voyage album was a dreaded inside joke. The joke was on us actually. Between sending to the pressing plant and its eventual release many months later - we learned that many in the DC upper-tier bristled at the term "emo." Something originally coined by our friend/roadie "D.R." at a Rites Of Spring show. He noticed that audience members at the foot of the stage had started crying at such shows. Punk rock had turned into catharsis and this puzzled him.
Thanks for the review. Sadly, Fartblossom was a cool label that never took off. It was fun to play a few out of town dates with label-mates Dain Bramage though.