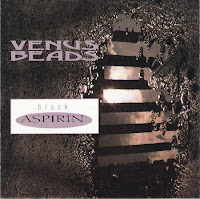 A couple years ago when I broached the topic of the UK-based Venus Beads, or more specifically their first and only proper album, Incision, I offered that for a band trying to make a name for themselves in Britain's thriving indie scene circa 1990 that they were stuck behind a rock and a hard place. Actually try between a phony, acid-laced Madchester psyche revival movement, and a relatively sublime but sometimes too heavy-handed shoegazer "place."  Yep, lots of adjectives there, but I digress.  The Venus Beads imbibed virtually neither flavor of Kool-aid, insteading opting for something a little more austere - and just as amped-out as My Bloody Valentine I might add.  On their follow-up mini album to Incision, the seven-song Black Aspirin is largely derived from the same sackcloth, with elements of such pedal-hopping country-mates as Mega City Four and the Jesus and Mary Chain sewn into a sonically dynamic fabric.  Lyrically speaking, "Does God Shoot Dice" is as insightful as anything you were likely to hear from say, Billy Bragg at the time. The Venus Beads made nary a dent stateside (save for bargain bins), but thanks for to the long put to pasture Emergo label (a division of Roadrunner Records) the band's catalog was made available in North America.  The CD version of Incision also tacked on the Beads 1990 ep, Transfixed, which I've included here as well.

I know some of you are looking for the Venus Beads first single "Day of Nightmares."  I have a copy, but unfortunately it's thoroughly worn out and not very presentable, even as far as MP3s go, but once a replacement is in hand there will be no stopping me.

This band certainly deserved a wider hearing than they probably got at the time. I was exposed to them only by happening to hear "End Of The Line" played at around 3 a.m. on the campus radio station of the college I was attending at the time. If not for that, I imagine this appearance at Wilfully Obscure would be my first exposure to them, as I never heard another song broadcast or ever came across any press about them. I long ago tracked down their releases, but didn't know anything about the first single you mentioned. I'm really looking forward to the day you're able to post it.

Great one. just picked up their other album on CASSETTE at a stoop sale in Brooklyn.
interesting side-note on a connection to MONSTERLAND. VB guitarist Anthony was nearly a member of Monsterland as 2nd guitarist. he was stationed in Connecticut for a handful of months and had played in rehearsals and a few local shows. logistics made it not to be,,., but he joined MLand when we played UK in Manchester for a few songs including a cover of Squirrel Bait's "Sun God". oh what could have been...

Thanks for the comments folks. Will try to get that single up in the near-future.

I love Monsterland as well, so that connection with the VG guitarist sounds like an ideal pairing. Had no idea. Too bad neither of those bands got their due.

Transfixed is one of the greatest EPs ever

Both records are so. good. I have Incision on CD but not Black Aspirin. This will have to do. :) Thanks!

Just found out that Rob Jones from Exit Condition was in this band... any chance of a re-up of these? As a huge Exit Condition and MC4 fan, would love to hear them.