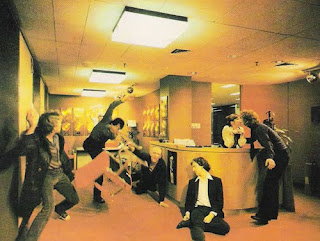 Indeed, here's a name that has not been brought up before on these pages.  Considering I've probably dedicated posts to some 500 other bands over the past three years, it's would be safe for you to assume Midnight Oil aren't a top-tier favorite of mine, but their second release, 1979's Head Injuries is a notable exception.  Roughly a decade before they made apolitical rock fans aware of the plight of the Aborigines and received ad nauseam video-play on a still music-based MTV, Peter Garrett and Co. were pumping out socially astute songs for their own independent Powderworks label.  Their self-titled debut mini-album from 1978 was a fetching enough warm up, but was short on the assertiveness they would bring to the fore on Head Injuries, a veritable quantum leap by comparison.

Armed with muscular, post-punk guitar leads and adopting a brasher axe to grind, Injuries would serve as a potent template for the Oils future recorded missives, though as a Yank I'm not sure if I'm comprehending the full gist of the themes raised within, esoteric as they sometimes are.  In short, I hardly feel a sense of empowerment, political or otherwise from listening to these demos, or the proper album itself, but the punchy riff-rock thrust of "Cold Cold Change" and "No Reaction" do illicit a sort of fevered urgency, that if anything else compels me to crank up the volume a few notches.  The variations between these crisply recorded demos (two entirely separate sets of them at that) and the finished product are slight to moderate.  The most notable outtake (that coincidentally leads both groups of demos off) "Don't Wanna Be the One," is a surging, organ-driven rocker that would later be re-cut for their next long-player, Place Without a Postcard.  Eight of these sixteen demos (with some overlap mind you), would bump 'n grind their way onto the commercial release of Head Injuries, which is still available from Amazon, and is a must have if any of these embryonic artifacts make an impact on you.

Comments
Posted by spavid at 5:48 PM

Pretty much everything this band released in the 80's is absolute top notch rock music. One of my favorite bands of all time. Yet, I'm not really into their first couple of albums. This is an interesting upload. Thanks!

An all time best album from the Oils! After hearing Blue Sky Mining, i drifted back in to the early stuff, and the big scream in Stand In line did it for me