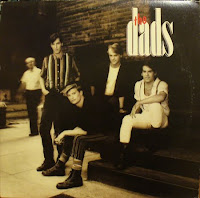 Here’s one of the most overtly “pop” records I’ve shared in quite awhile (though the “power” quotient is demonstrably present at times). In fact, you’re not likely to happen upon a song quite as giddy and sprite as The Dads opener, “Rhythm Master.” Denizens of the Richmond, VA area, The Dads managed to ink a deal with CBS Records in the mid-80s, only to have their sole LP all but plummet onto deaf ears, due in no small part to a seemingly indifferent label promotion staff, and a Quiet Riot-hungry public. For the full scoop look no further than the Dads facebook site for an exhaustive backgrounder. As for the album and the music enshrined within, the band had second thoughts almost immediately after the recording sessions. Committed to tape under a strict deadline, the bio concedes that The Dads was a rush job, and furthermore wasn’t representative of (you guessed it) the quartet's live act. Nevertheless a small legion of fans found themselves endeared to it, and for a group that seems to have been inspired by the likes of The Rubinoos, Glass Moon, and even the Plimsouls, it’s a cinch to understand why. Polished but incessantly catchy and smart, The Dads was forged in a mold not far removed from Candy’s Whatever Happened to Fun.  Simply put, a great listen.

In a profoundly startling and tragic turn of events, Dads bassist/co-lead vocalist Bryan Harvey and his entire family were murdered in a New Years Day 2006 home invasion. The bio linked above mentions the incident, but greater details can be obtained here. Harvey was also a former member of House of Freaks.

Hey, thanks for the blog, I appreciate it. It was a great time in my life.

Thanks for this album.Very much appreciated.

Hello,
I know I am a few years late on this, but I JUST discovered this blog post. I really loved this band and this album when I was younger and lost it a LONG time ago. Is there anyway to re-post the files so I can download? Thanks so much.

The link has just been fixed. Enjoy.

Hello,
I'm a few years a a few months late on this, but I'm in the same situation as the previous guy! I'm on a massive House of Freaks/Gutterball kick, so a re-post would be greatly appreciated. Thanks!

Awesome - thanks so much!

Brooke & I are really looking forward to filming the upcoming Dad's reunion show in November. I've never seen the Dad's perform as a band, but I've known & seen most of the members perform in many other excellent bands for many years, so the combined efforts should be exceptional.

Brooke & I are really looking forward to filming the upcoming Dad's reunion show in November. I've never seen the Dad's perform as a band, but I've known & seen most of the members perform in many other excellent bands for many years, so the combined efforts should be exceptional.

Happy to hear about this band, and hope to encounter proliferation of this concert on YouTube.

FYI - Th Dads' second album "Redemption" has finally been released twenty or so years after it was recorded. I just got my copy in the mail this week and it is GREAT. I liked the first LP, but this new one blow it away. Really happy it finally came out.

I've also added an mp3 file for the live set from the show at 7th Street Entry (1981). I used a free online YouTube to mp3 converter to get the audio from this video, which is a little more New Wave/Post-Punk than the self-titled album. I *think* it's the same band, but I'm not sure.

Hi again
could you please re-up this one?

Hi again
could you please re-up this one? You must have missed this on August's re-ups.

Thank you very much as always

Could you reup load this again? Thanks

The Dads played at my (Richmond, VA) high school homecoming dance when I was a freshman (c. 1983). Bryan Harvey was quite talented but like most just kind of got ground up in the machine (and then, of course, the home invasion... so sad). Coincidentally, the Dads' drummer's brother (Ricky) is involved in my little music project (guitars/vocals).