For a blog that's been up and running for a good three years now, an assemblage of Flop's plethora of singles is long, long overdue.  Flop were situated in the absolute right place (Seattle) at precisely the right time (the first half of the '90s), yet the existence of this fine quartet was utterly lost on any "self-respecting," flannel clad trend hopper of the era. 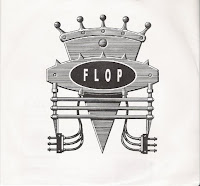 A spinoff of another local outfit, the equally as enticing Pure Joy (who I dedicated some quality cyberspace to last year), Flop were helmed by one Rusty Willoughby, the focal point and lone carry over from that group.  Flop's Kurt Bloch produced debut, Flop and the Fall of the Mopsqueezer arrived on Frontier Records in 1992.  While all eyes at the time were glazed on the Pacific Northwest for the next wave of grunge superstars to emerge, Willoughby and Co. were inclined to follow the sonic template laid out by the Buzzcocks, not Black Sabbath and Blue Cheer.  Mopsqueezer lent Flop to a far wider audience that anything Pure Joy released, but overall their national reputation was slight at best, despite their next album, 1993's Whenever You're Ready being taken under the wing of Sony Records.  The majors leagues had little to offer them, and they were pitched back to Frontier for their third and final LP, World of Today in 1995 to little fanfare. Willoughby's wry, enlightened wit set Flop well outside the punk-pop pack of Green Day and the like, but much like hometown mates the Fastbacks and Young Fresh Fellows, the band failed to make mainstream inroads. 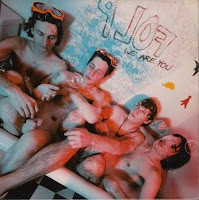 Before and in between their trio of albums were some bang-up eps and singles, often bearing material just as crucial as their LPs, including telling covers of Sweet, Devo, and Jam classics.  Presented are all the 7" singles that I'm aware of, including a five-song ep for Munster Records that featured a pop-up, gatefold sleeve.  A concise but intriguing Wiki article on Flop can be read here, while their albums are readily available from the usual host of online MP3 merchants.

thanks for this! if you have it, could you post the Sub Pop Hype! soundtrack--the 7" box set version? Apparently a number of the songs are different or were not on the original CD release. There's a great Flop demo on that set...

The new Rusty Willoughby record, Cobirds Unite, will be out July 20.

I have the cd of Hype!, not the vinyl box, but the cd contains a demo of Flop's "Julie Francevilla."

Thanks for the heads up on the new Willoughby album Ric.

i'm actually looking for the Young Fresh Fellows track from the 7" box set, "Dark Corner of the World." I know it was from a split single with the Dharma Bums on Sub Pop; it's the wonderful tune that's the main menu track on the Hype! DVD, and it's a song i've been looking for for AGES now. if ya have it, could ya post it?

Loved Flop. Thought I had everything they released. Not so, apparently. Thanks for the awesome post.

Great, great, great blog. Really. And of course I find after sifting through god knows how many pages that yes, you are fully aware of flop, as you should be. Thanks for these. I have them all and have already digitized mine, but thanks for putting out there for others. God damn flop were excellent. The Losin' End is fabulous. Also, check out Bill Campbell's (flop lead guitar) earlier outfit the Chemistry Set. There's a 7" called Look Over Your Shoulder you should have.

Thank you for the blog, could you please re-up this compilation?

I think Flop backed Ed Fothington, from the Thrown Ups, on a Super Electro single "Eddy and the Back Nines." Catchy golf-themed songs.

please reupload link down... and thanks for the wonderfull blog

can you re-up the album please?