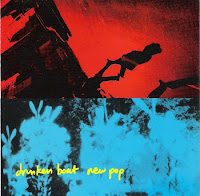 Drunken Boat were a New York quintet who were active in the early-to-mid '90s, but failed to catch on, even to hep, left-of-the-dial connoisseurs.  The New Pop ep peaks hard and fast with the song of the same name - a taught, treble-punk ass kicker that packs a bodacious amount of thrust and verve into it's scant two minutes.  Scintillating and sizzling.  The remainder of New Pop pales tremendously, veering off into artsy, abrasive tangents with mouthpiece Todd Colby strangely evoking the screechy vocal aplomb of Kim Gordon, and to a lesser extent Mark E. Smith.  A rather subdued reading of the Young Marble Giants "Salad Days" winds this affair up.  Better records were to follow, including Ruby Falls in 1992.  Colby would later branch off into poetry, and like yours truly, he's embraced the blogosphere.