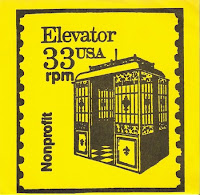 Straight-up, three chord bash 'n pop here courtesy of a Somerville, MA (i.e. suburban Boston) trio.  Having monikered themselves after an inanimate object, and a fairly ubiquitous one at that, pulling up any vital stats on Elevator is practically a fools errand (though I did come across a brief reference that claims the band was a side project of Beantown ska-sters Bim Skala Bim).  No ska here though, rather more in the vein of Finger (who I recently featured), and early Figgs.  The A-side is aces, particularly the rip-roaring "Eleven."  The lazier "It's Allright" never exceeds past a slow boil, but hey, two out of three...